With one map, I was able to create two decorative projects.

Does anyone use maps anymore?  Honestly, I don’t think I would even be able to find one in a store if I tried because we all have gotten so used to our smart phones and technology – NOT that I’m complaining about that, but I just hate to lose the beauty of old maps.

Speaking of maps, I recently came across this old map of Knoxville we purchased in 1999 right before we moved to this area (yes way before GPS on our phones).  Since we really didn’t need it anymore I decided to use it to spruce up a mirror in a spare bathroom and to create inexpensive DIY art for a spare bedroom. 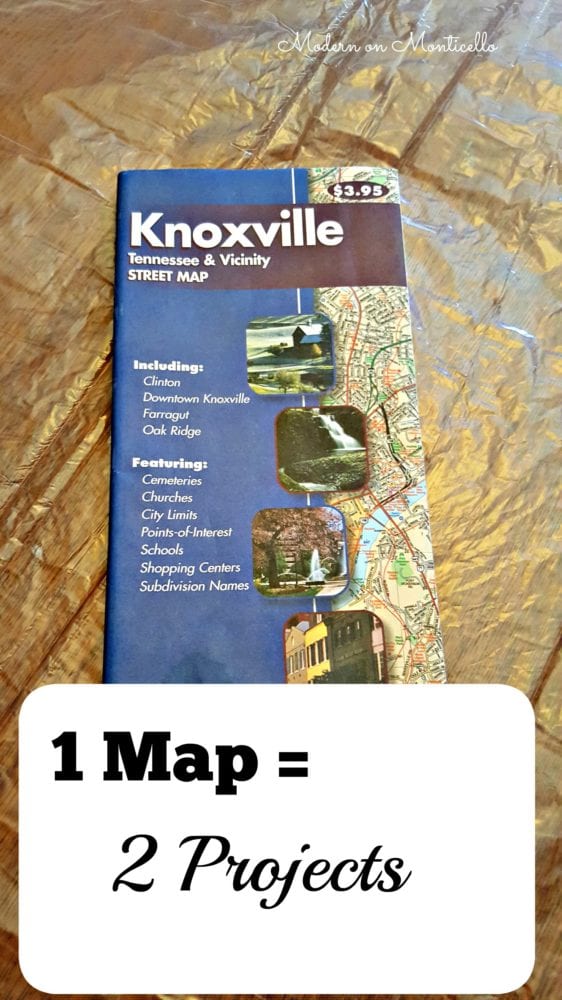 I have wanted to do a project with an old map for some time but just hadn’t figured out what that would be yet.  Now I finally had a map to work with and one big enough for multiple projects.

On a side note, I need to apologize for the picture quality in some of my photos.  Both of the projects were meant for rooms in our basement or basement bathroom that has little to no natural light.  It was basically like taking pictures in a cave.

This post contains affiliate links.  Thank you for your support.

For these projects I used:

To age the map, I laid it out on plastic sheeting and applied several coats of coffee to it.  This took at least four applications and nearly 24 hours as I had to allow each coat of the dark coffee to dry each time. 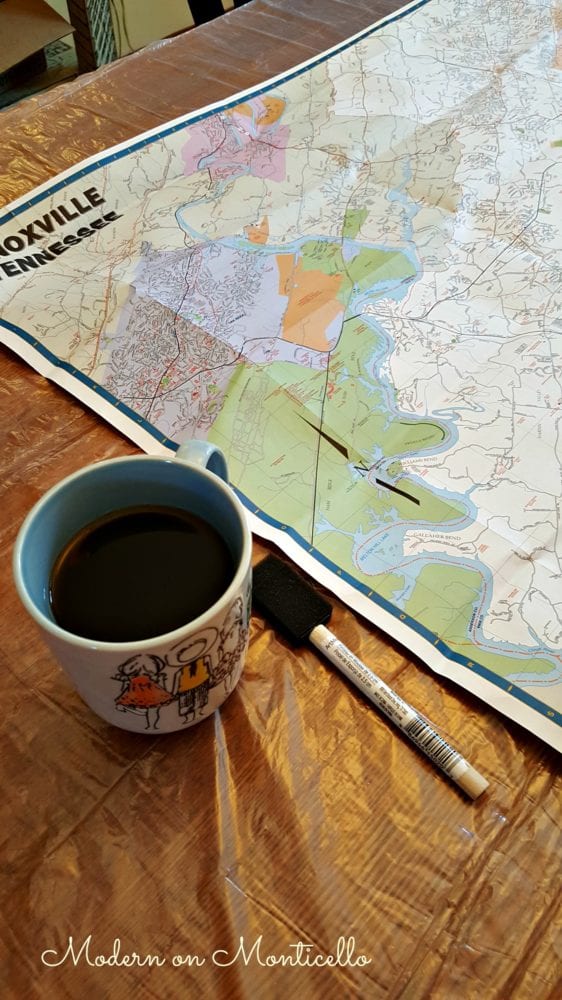 After the map was thoroughly dry, I was able to make the two 16 x 20 canvases for the DIY art pieces.  I first layed the canvases face down on the map over the area I wanted to feature on the canvases.  I then traced an outline around each canvas and cut out those sections on the map.  Then it was just a matter of using the Modge Podge to attach the cut outs to each canvas.

To secure the back edges of the sections to the canvas, I used the decorative tape to make for clear edges.  Then I just hammered in the picture hanging hardware in the top center of each canvas. 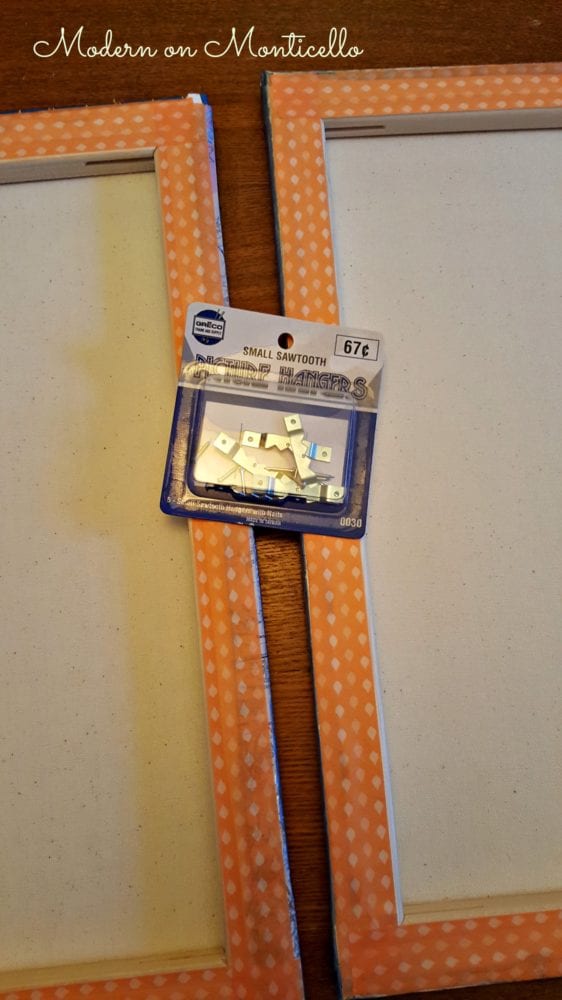 Now a dark and boring corner of one of our basement guest rooms has a little bit more color and life. 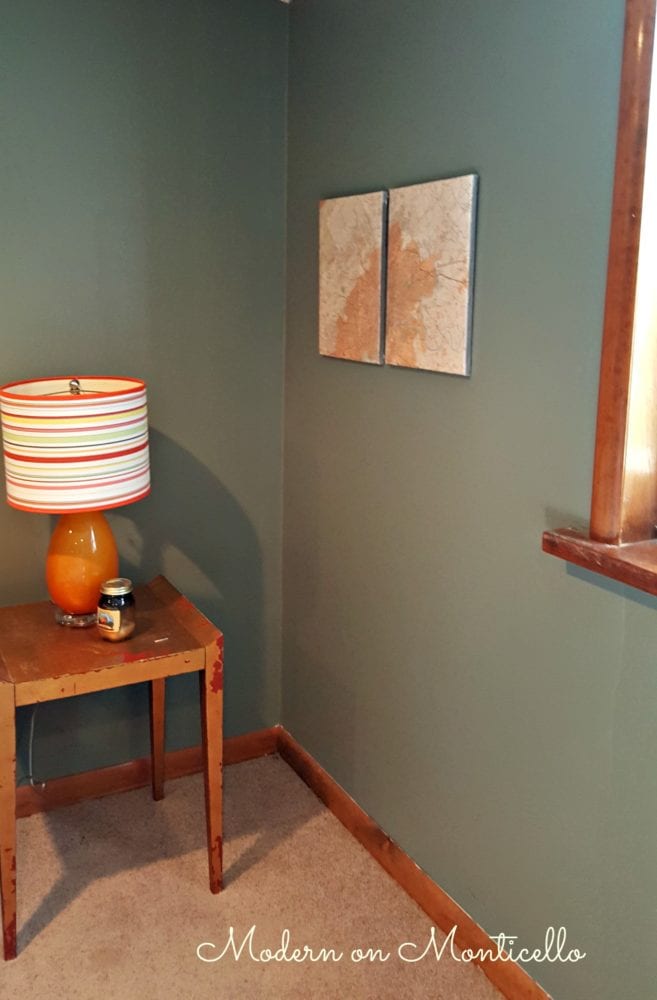 This is still a very plain room for now but since it is rarely used I prefer to put our available budget elsewhere.  But one day…

For the second project I tackled a makeover for a very boring white mirror in the basement bathroom. 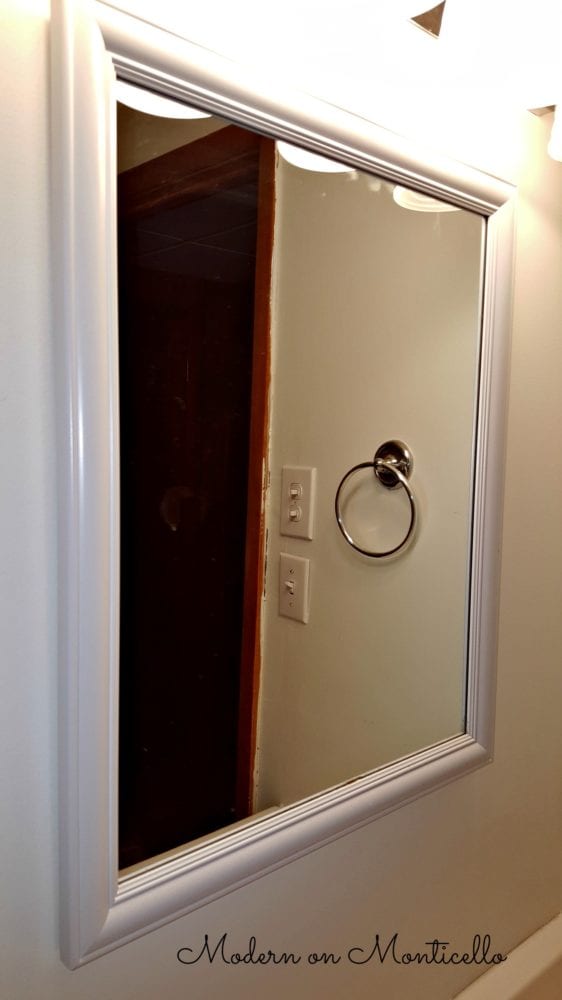 This is just a white plastic framed mirror on a white painted wall.  It almost just disappears, but I wanted it to make a statement.

The decor in this bathroom already has a nautical theme, so I used the map to play up the idea of travel.

I first applied a base coat of the metallic silver paint to the plastic frame to match the fixtures in the room.  After cutting up the rest of the map into small pieces, I then used the Modge Podge to apply those pieces to the mirror frame.  I allowed for wrinkles in the strips of paper to give the frame some texture and character. 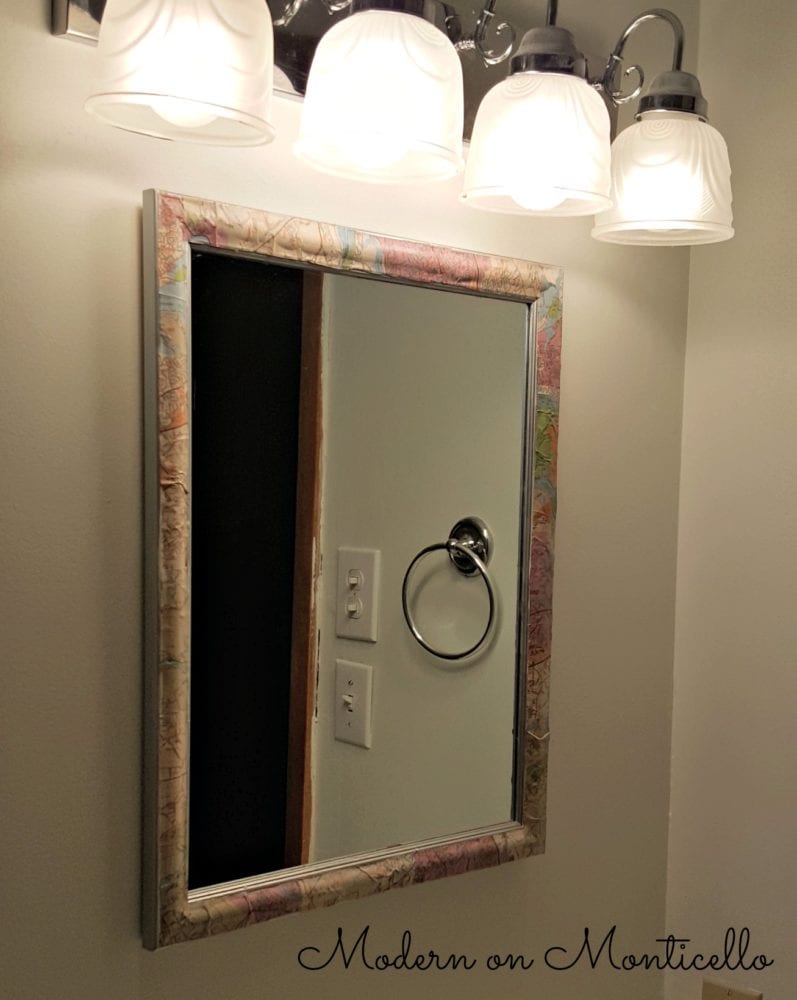 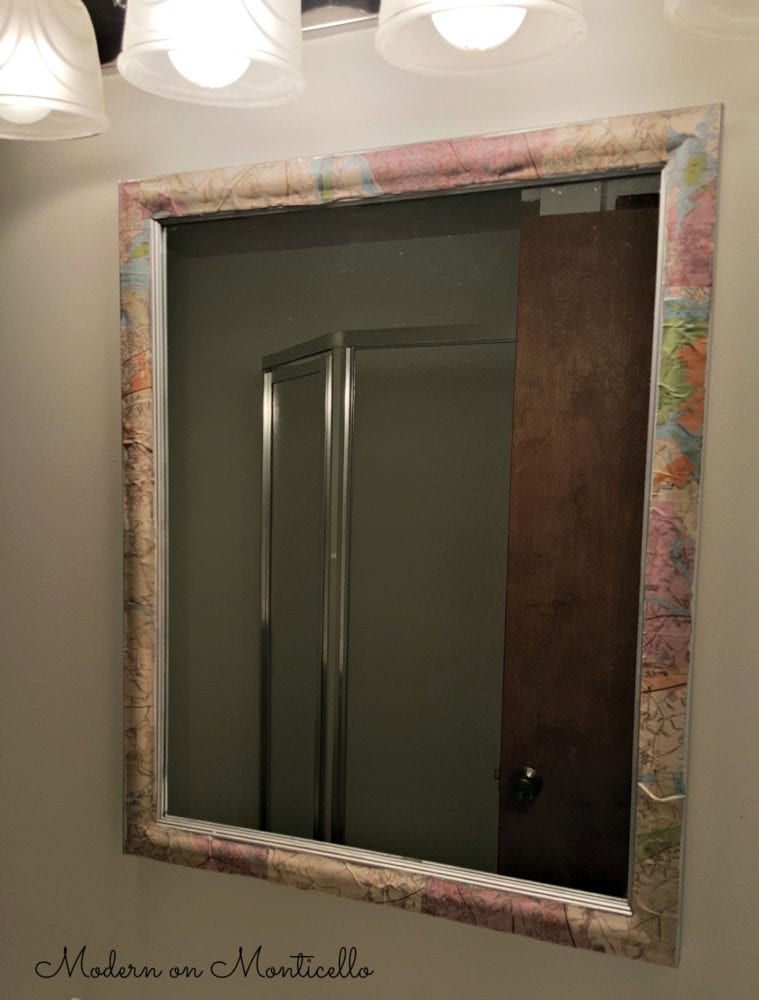 We have dreams of one day remodeling the main room of the basement to include a new kitchen and movie room and I plan to hang a large map to document all the countries my husband visited while in the Army, mission trips our son has been on to other countries, and every place we have traveled as a family.  I figured having a few travel/map accessories in the adjoining rooms will bring the whole basement theme together.