Time to say goodbye to the old stained carpet in our family room and hello to some new things like can lights!  For week two of the One Room Challenge this post is all about can lights and carpet and a few adorable pictures of our dogs along the way. #oneroomchallenge #bhgorc 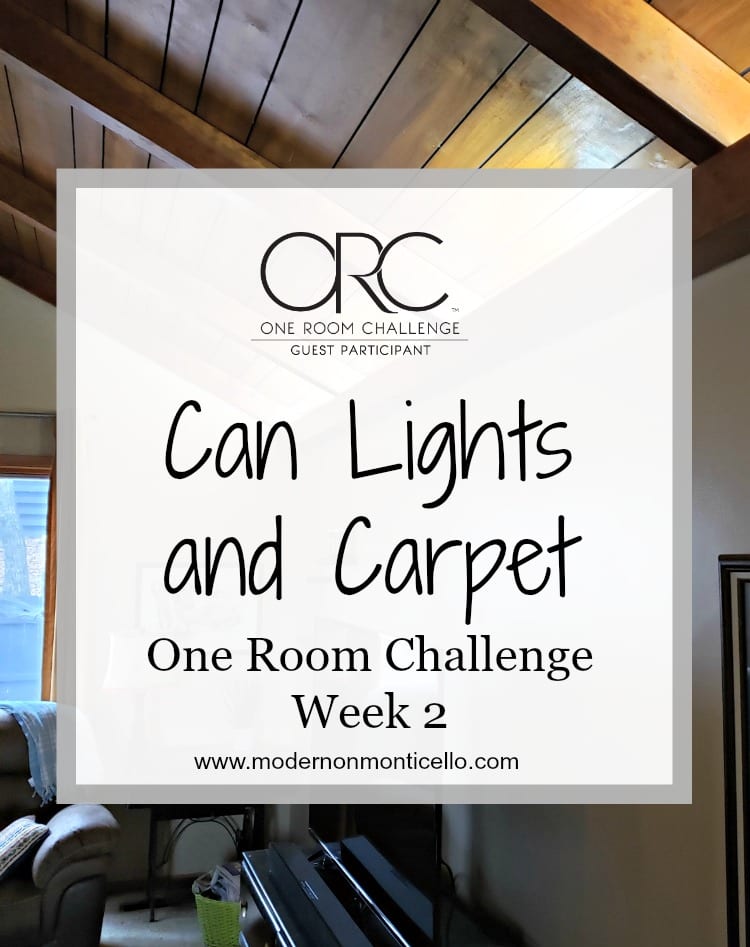 The first two items on our to-do list for our family room makeover were to rip out the old carpet and to convert the old cove style lighting to can lights.  This part of the project actually took us two Saturdays to work on but for the challenge I am including them in the same week of posting since they were started at the same time. 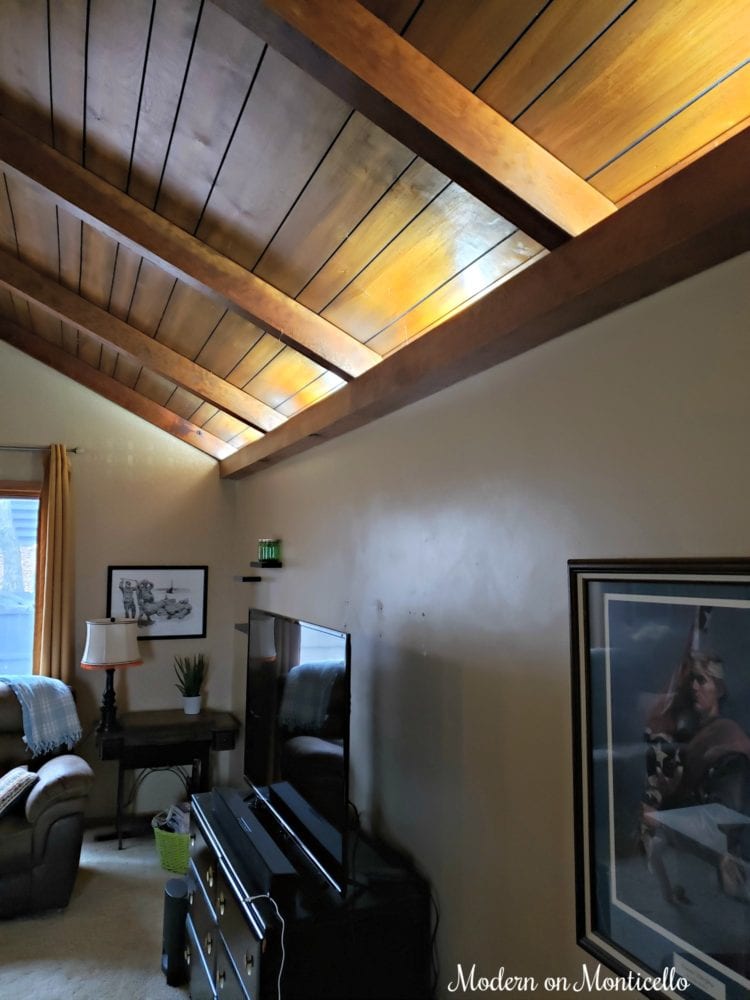 This room was originally built with custom cove lighting installed behind the lower beams of the cathedral ceiling.

The cove lighting provided very little light to the otherwise dark room.  So, it was my husband’s idea to convert the cove lighting to can lights.  The lower ceiling beams are actually open boxes made to look like beams, so he was able to drill a hole through the boxes to install the can lights.

After taking careful measurements to the center of each ceiling section, my husband used a round saw to cut out an opening the size of the small can lights we had purchased from Home Depot.  The size of the wood beam box determined what size can lights we purchased.  We spray painted the can rings in dark brown over the original white ring color.  The white color just wouldn’t have been a good look in the wood beam. 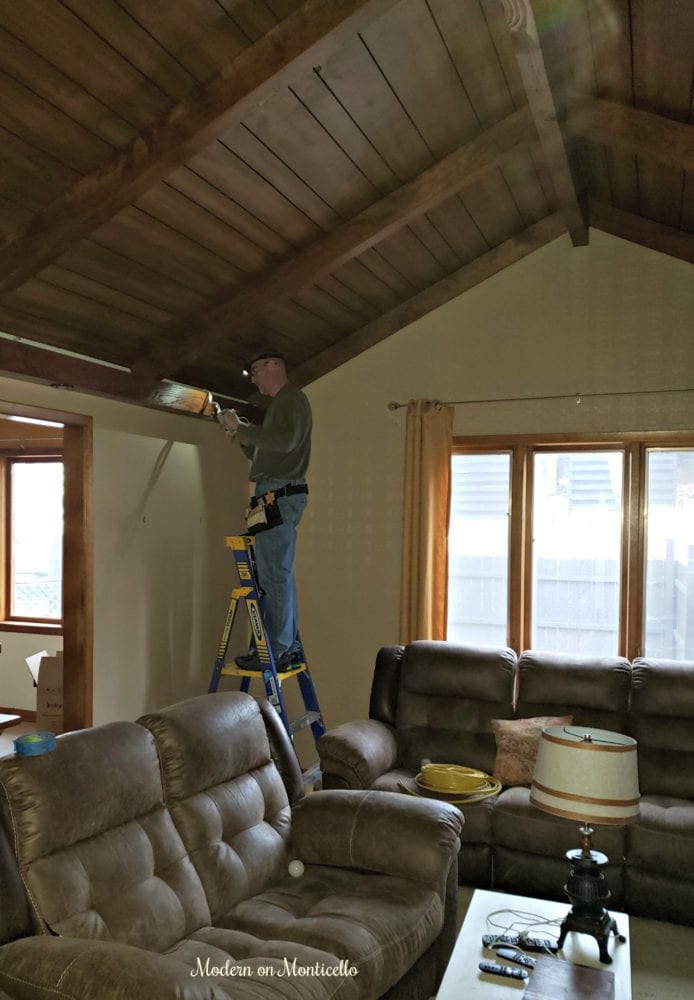 I would really love to paint the wood paneled covered ceiling and beams white, but decided it would give the room too much of a farmhouse look.  We definitely don’t live in a farmhouse style house so it is not the look we were going for.  So we nixed that idea.

As with most older houses, we had a few hiccups with the electrical work during the upgrade.  At one point we could only get two of the can lights to work.  Once my husband figured out how the original electrical lines were installed and connected together, he was able to get all of the can lights to work.  It took several trips to Home Depot for new supplies and extra time to install new wiring.  It was lots of frustration for him during the process but the end product was worth it though.  Electrical work is something I stay completely out of. 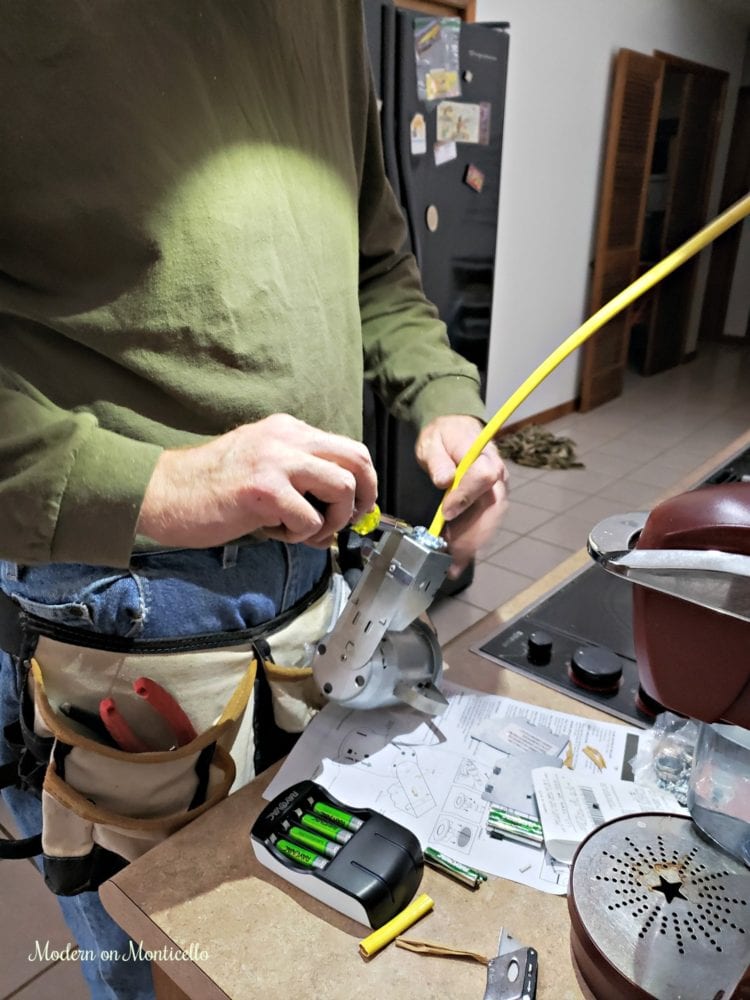 The next step was to tear out the old carpet. 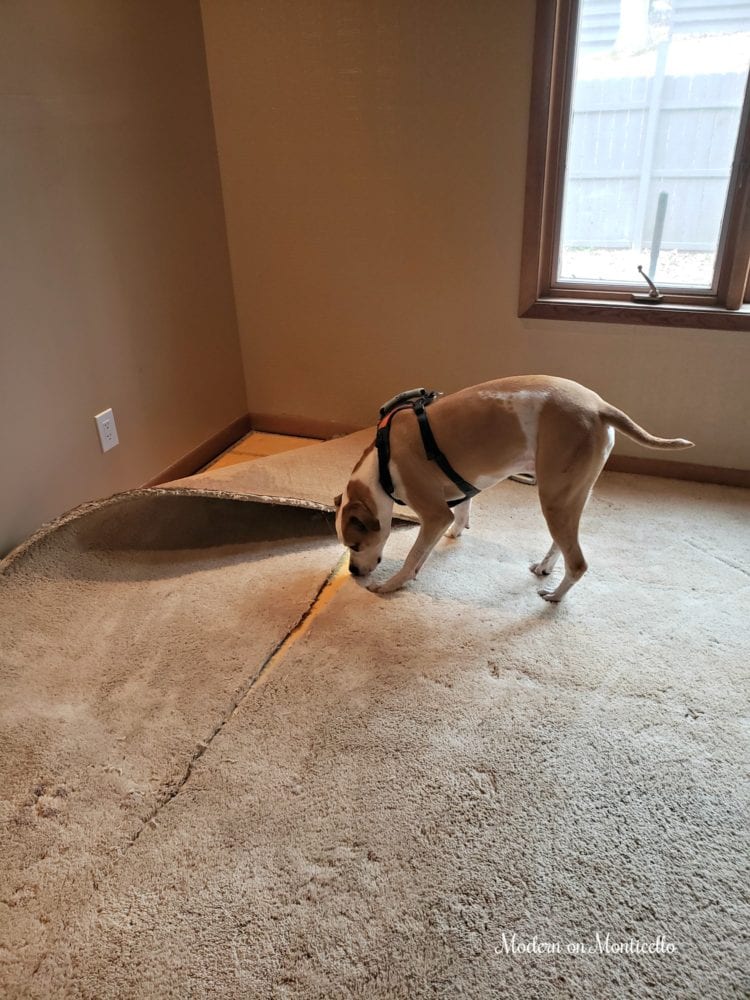 Pulling up the old carpet was nasty business.

The previous owners had small kids which meant lots of spill stains on the carpet.  Over the last few years as our small chihuahua dog got older, he couldn’t control his bladder and would sneak in to this room to use it as his indoor bathroom.  Even though I tried to keep him from doing this he was like a sneaky little ninja about it.   The little old guy may have already passed on before we started this project, but the carpet was in really bad shape either way.

The need to get rid of the smelly carpet is what inspired this whole transformation.

After moving most of the furniture out of the room, my husband and I cut up the carpet in two foot wide strips to make it easier to roll up and throw out.  Removing the carpet really upset our larger dog though and he kept interfering with the process.  Shiloh has had two hip replacements and won’t sit down on a hard surface so he fought the removal of the carpet until the very end. 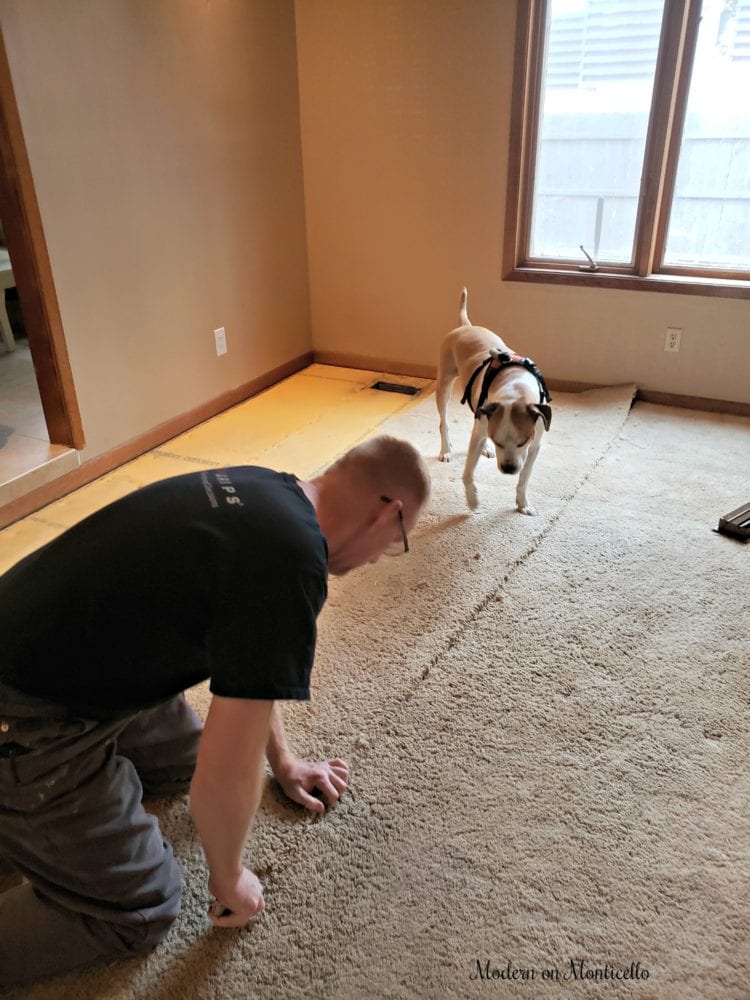 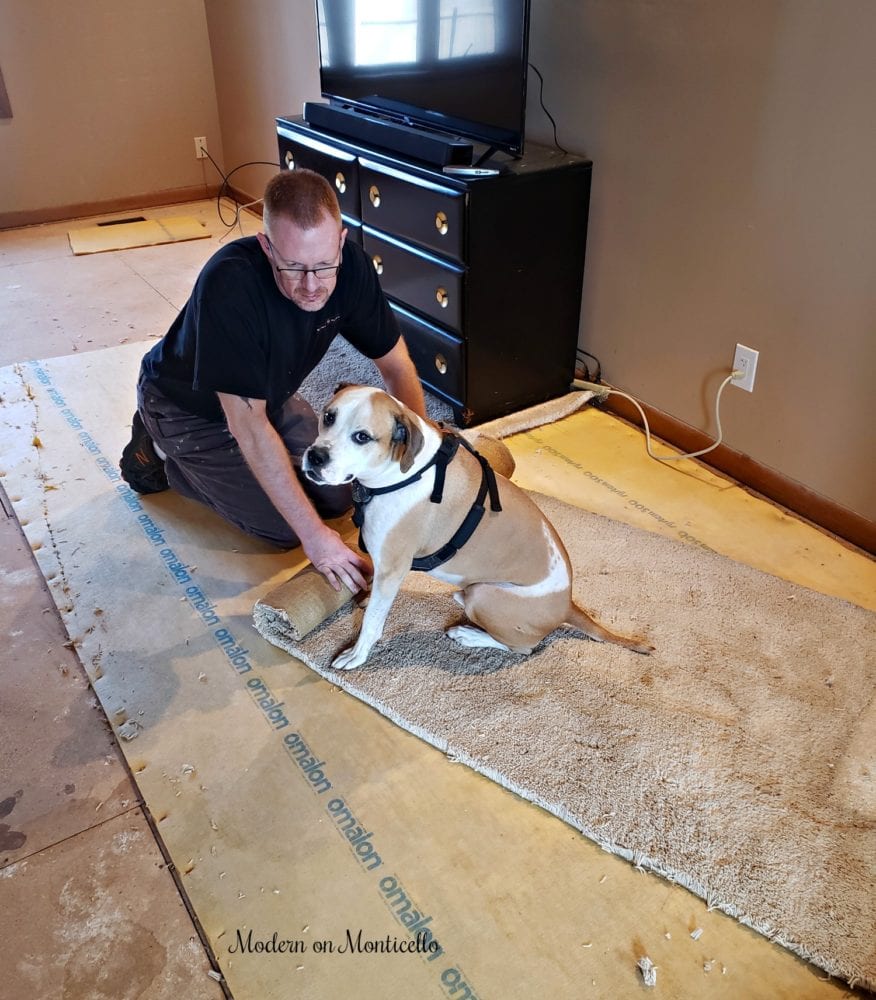 Once the carpet was removed, we started the tedious process of removing all of the tack strips and staples.  I don’t have pictures of us sitting on the floor pulling out the staples, but you can imagine what that was like and how long it took.

Because of all the stains the carpet had and the musty smell, we decide to treat the sub-floor with an odor blocking primer and stain.  I have never painted a floor before but with a long pole it was actually easier than painting a wall.

Another one of our dogs, Pippin, is checking out the newly painted floor. 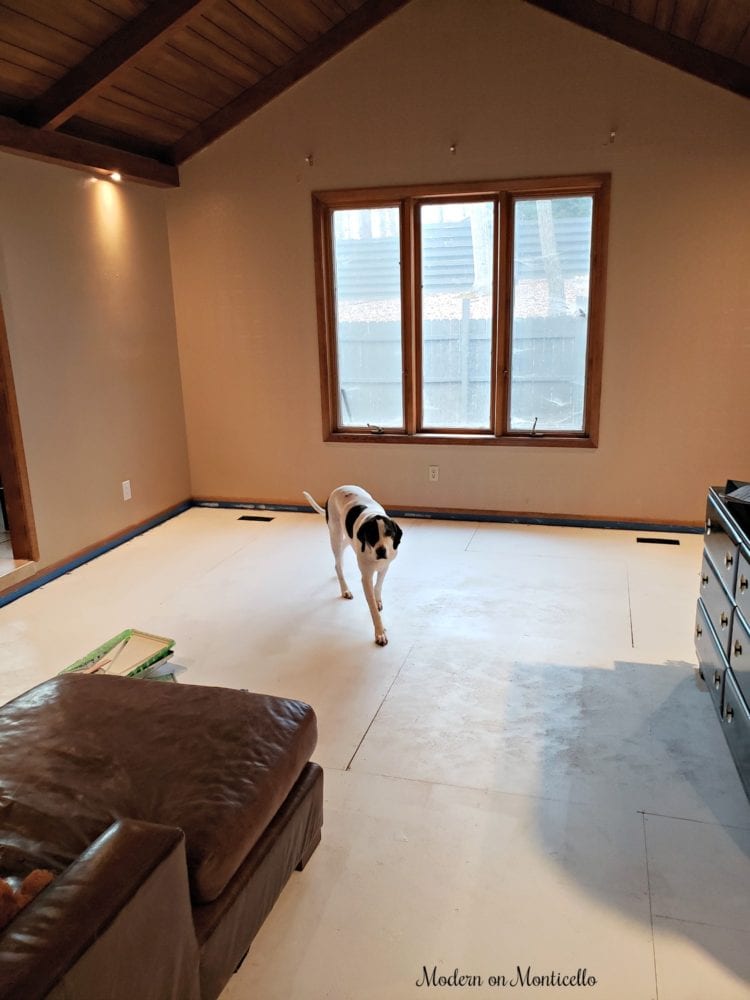 And this is a wrap up for week 2 of the One Room Challenge.  Our next step in the project is to install the new wall treatment to cover the wall vinyl on the back wall.

2 Timothy 2:15, NASB: “Be diligent to present yourself approved to God as a workman who does not need to be ashamed, accurately handling the word of truth.”