When we planned our new sunroom, I knew I wanted lots of sheer drapery panels.  To make this happen, we created our own DIY electrical pipe drapery rods. 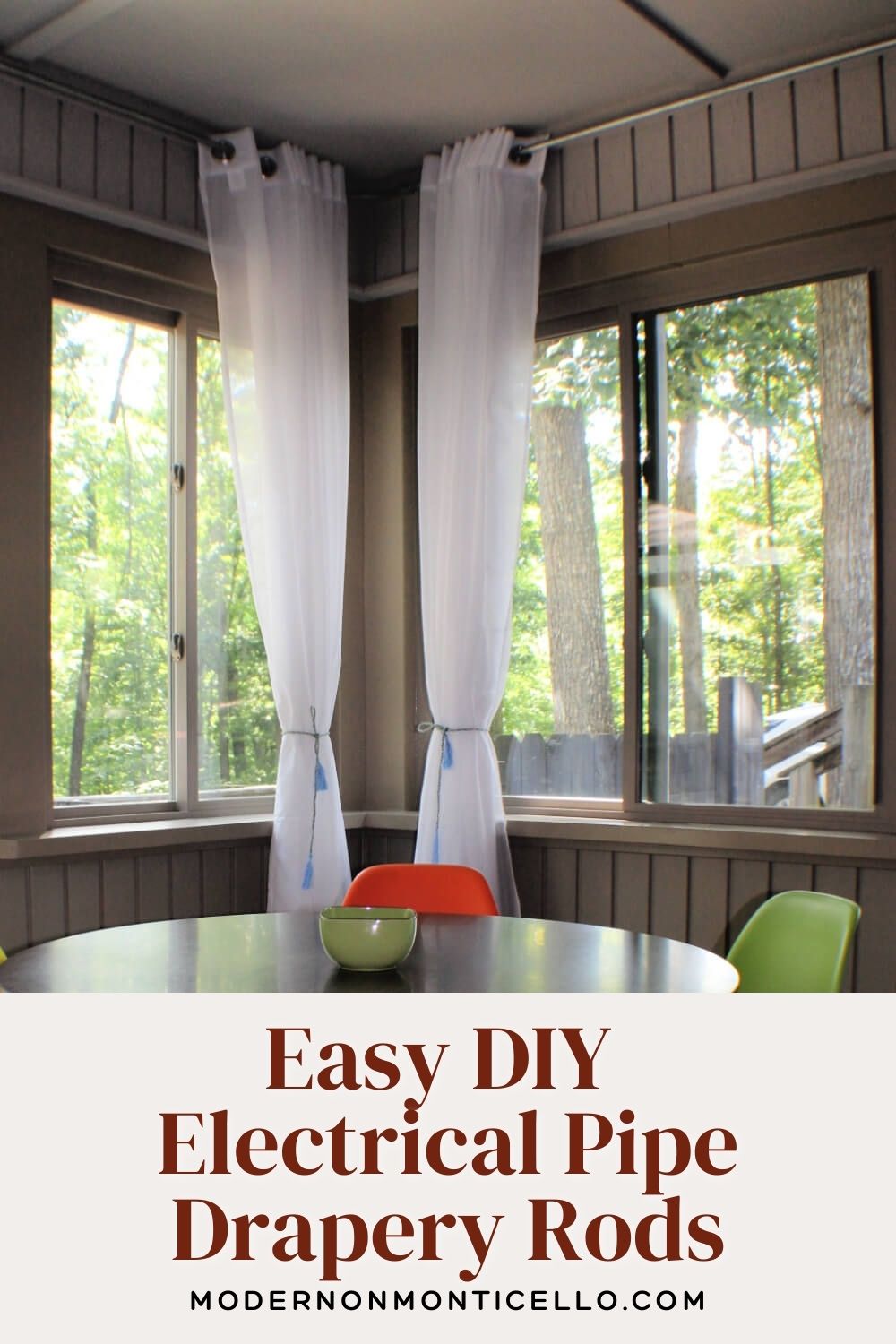 Our new mid century modern inspired sunroom has large windows that we planned for along two main walls of the room.  I wanted lots of light and warmth in the room.  However, I also wanted privacy when needed and a way to block the harsh sun off the TV screen as well during certain times of the day.

The best way to do that is with outdoor rated sheer drapery panels I purchased from Wayfair on the special Way Day Sale.  However, I decided to add panels in front of the sliding doors to the kitchen as well and the ones on WayFair were on back order.  I found similar outdoor sheer panels on Amazon for the second set.  In all, I purchased 8 sheers that are 96 inches long.

I needed to cover two long walls, one door, one sliding door, and 5 windows. 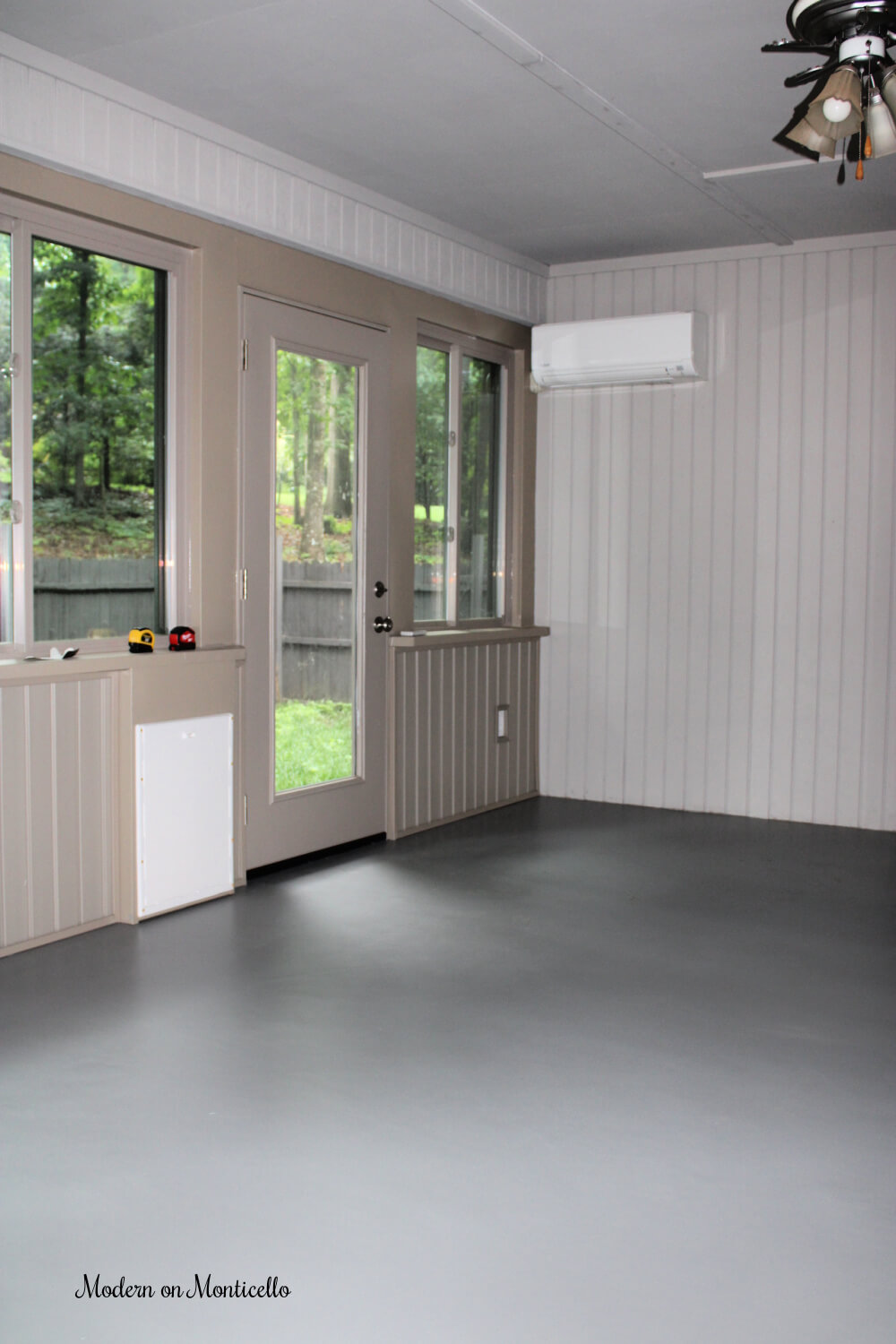 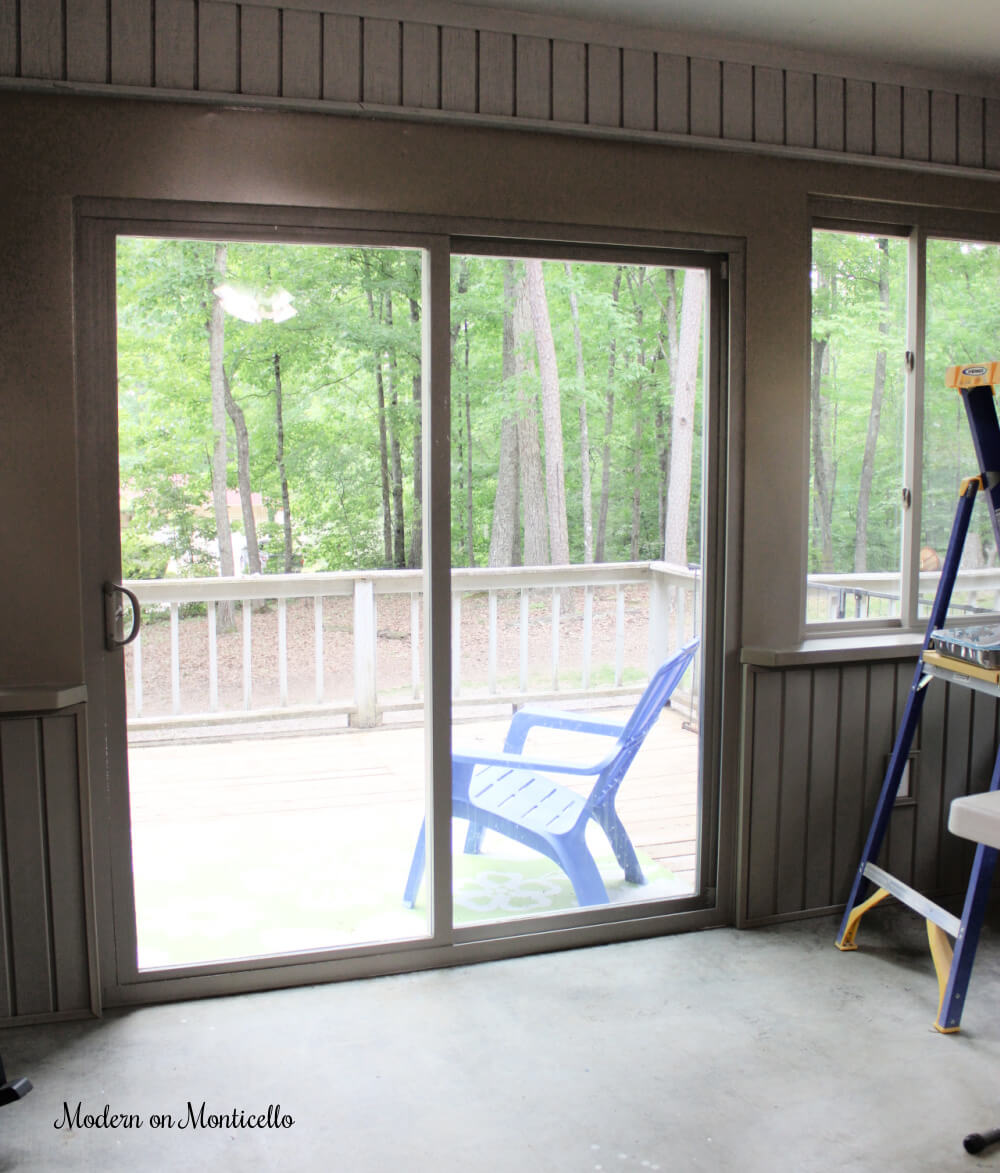 The two walls of windows that needed the sheers were 14 and 18 feet wide respectively. I also would need a third drapery rod and 2 panels to cover the sliding doors to the kitchen on a third wall.

On the two longest walls, I would need 4 sheer panels on one side and 6 on the other.  With the weight of this many sheer drapery panels and the long length of windows on each wall, it would take a very a strong drapery rod to hold them up.  Or multiple heavy drapery rods.

I also wanted to be able to push the panels together in the corners to enjoy the windows as much as possible. Or to move the drapery panels to the middle of the wall without the drapery rod bending under the weight.

That was a lot to ask for most drapery rods available in stores and to afford it on a tight budget. I honestly didn’t have the budget to purchase the drapery rods needed for the room.

So we created our own drapery rods out of 1/2 inch electrical conduit pipes and connectors.

Metal electrical conduit pipes are strong and can hold the weight of several drapery panels pulled together without sagging in the middle of the pipe.

Since I wanted the drapery panels to hang floor to ceiling, the brackets needed to be installed close to the ceiling and could not be large brackets.  My husband worked out the details of my vision for the drapery rods and purchased the supplies from Home Depot. 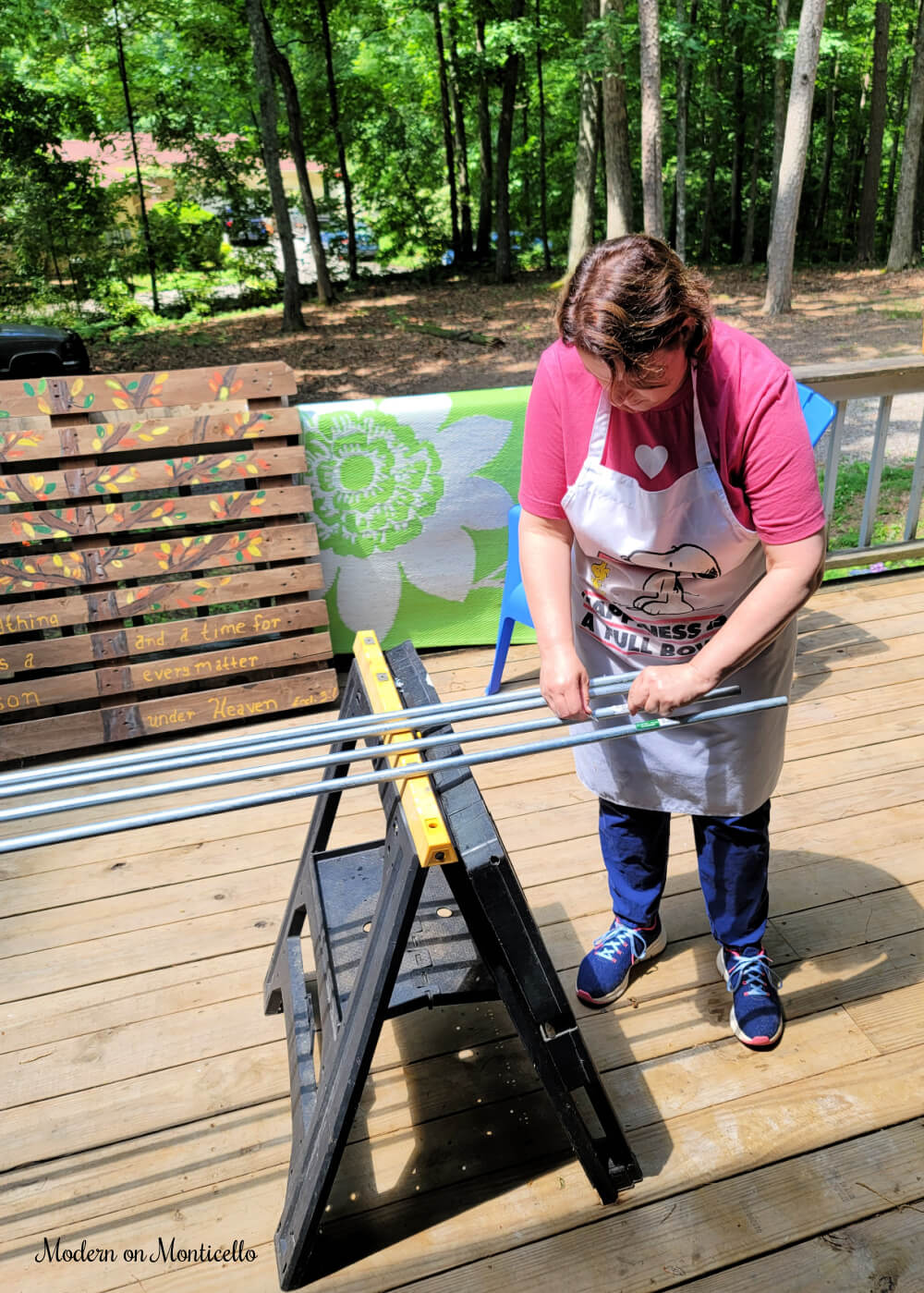 It was so hot that day!

To start the project, I removed all of the stickers from the conduit pipes and wiped them with mineral spirits to remove the dusty coating. Conduit pipes are not only dusty but also have markings and writings on them.  The mineral spirits really helped to clean them up and make the pipes a bit more shiny like drapery rods should look.

I wanted to keep the silver color of the pipes because the grommets on the drapery panels were silver. We decided not to spray paint them black or even a brighter silver.  Another thing I was worried about was that the spray paint would scrap off the pipes each time I moved the drapery panels.  Not having to paint the electrical conduit pipes saved us some time and effort.

Since the electrical conduit pipes were available in 10 foot pieces, we had to cut two pipes for each long wall.  Each wall would have two equal lengths of conduit pipes cut down to be connected together in the middle and hung by a metal rigid conduit hanger.  This was done by using a Electric Metallic Tube (EMT) inserted in clamp style metal brackets in the middle of two equal sections of pipe for each wall.  My husband cut the pipe to the needed lengths using a hand held conduit tubing cutter.  Then we both had to tighten the screws on the metal tubes to keep the pipes from sliding out of the tubes and out of the hanger. 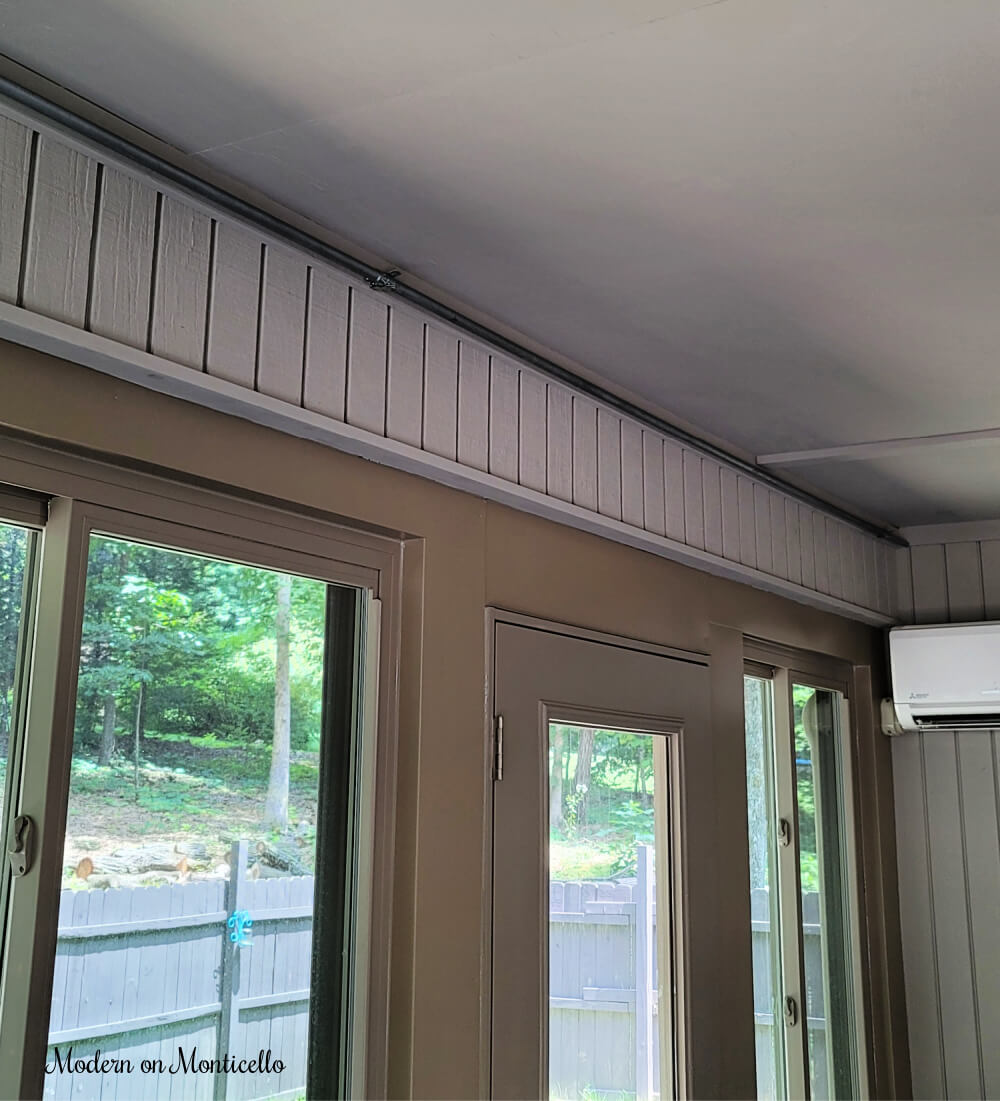 I wanted each length of drapery rod to touch the far walls and to wrap around the corner as well, so that it became part of the architecture of the room and the drapery rod and panels looked like a continuous loop around the perimeter of the room. 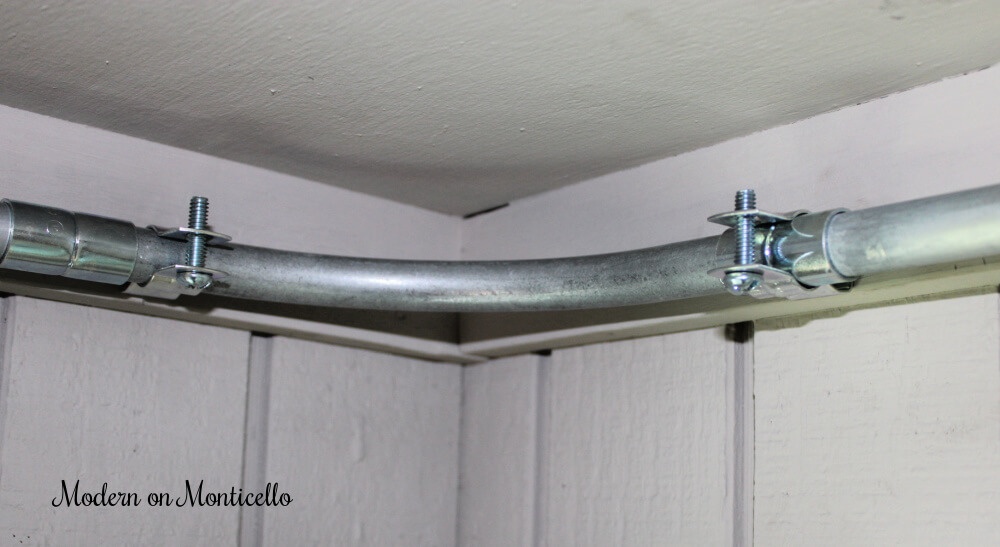 In the corner, my husband installed a 90 degree curved piece of electrical conduit to connect the two lengths of the walls sections together using the metal tubes and more hangers. 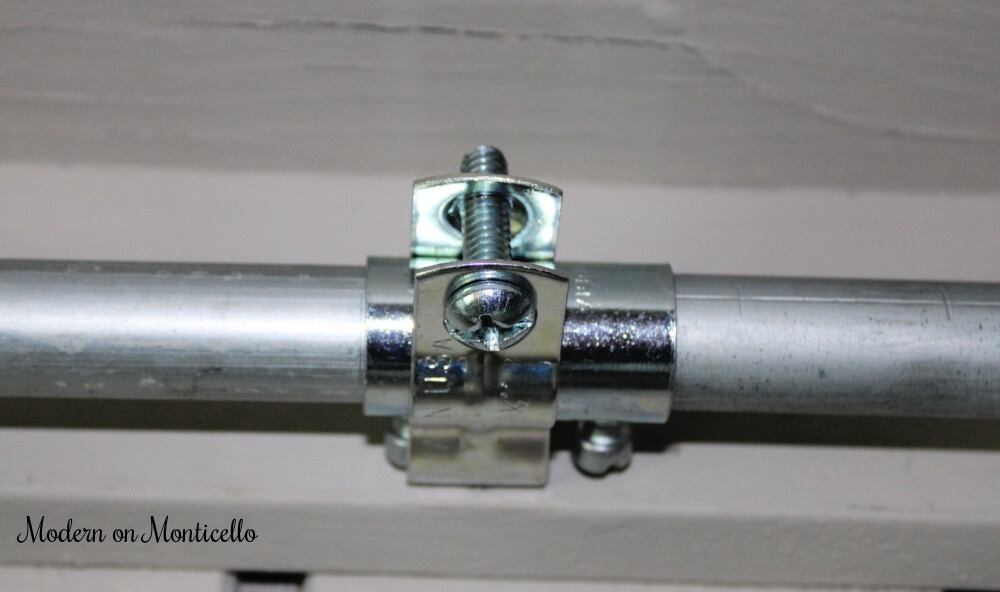 The picture above shows an up close view of the clamp style bracket that is screwed to the wall, then the electrical metal tube (EMT) with the screws that tighten around the two ends of the cut pipes, inserted in to the hanger and tightened down with a large screw.

It takes at least two people to hang the rods.

Even though my husband did the work of installing the metal hangers, it took both of us to hold the long lengths of the electrical pipe, slide the grommet style panels on each pipe, and then slide the pipe in to the metal hangers and tighten down the screws. 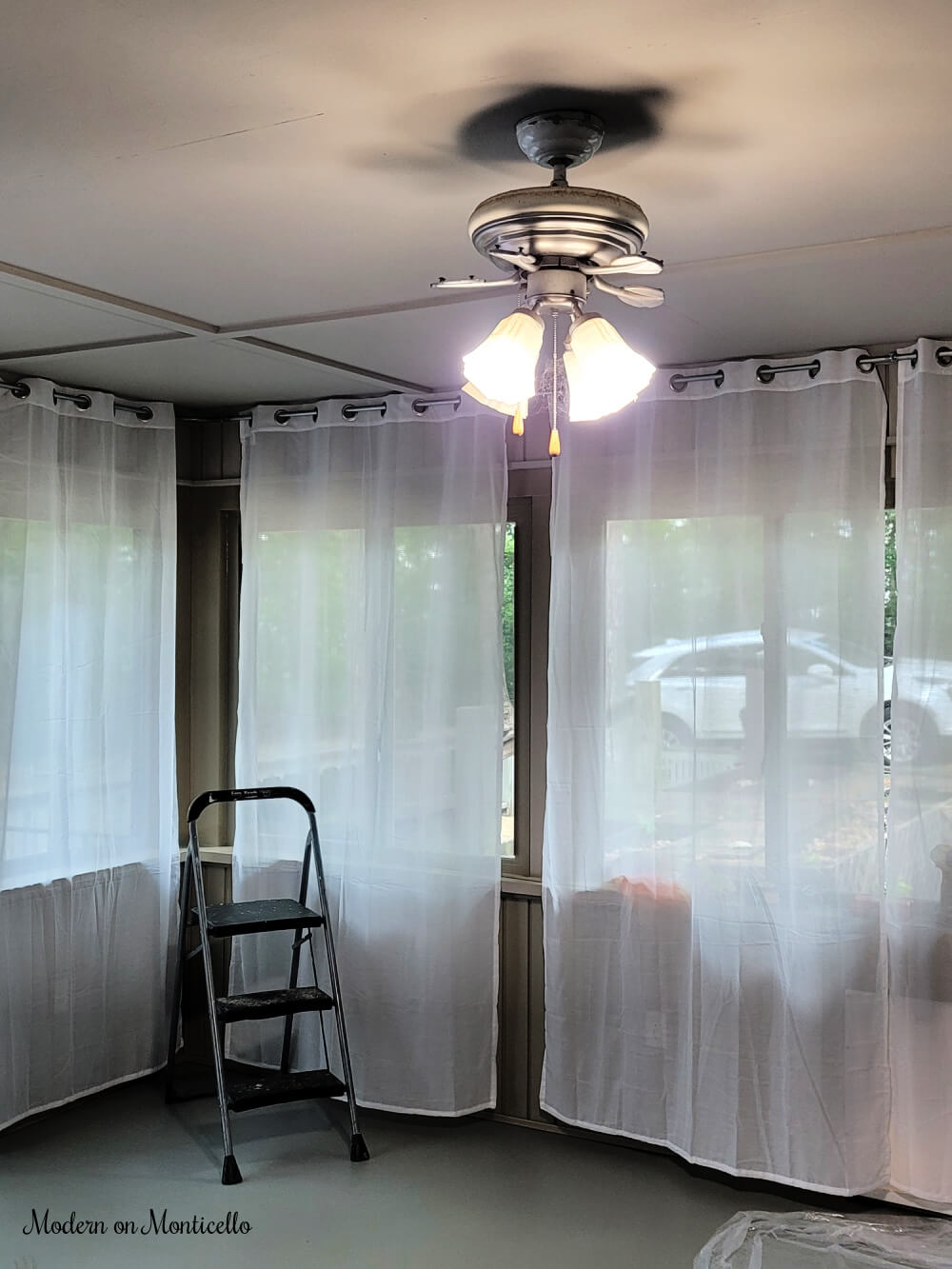 Of course the panels can’t slide all the way around the room on the pipes, because of the necessary brackets. But it does make the pieces look like one long length of pipe.  Just like I wanted it to look. 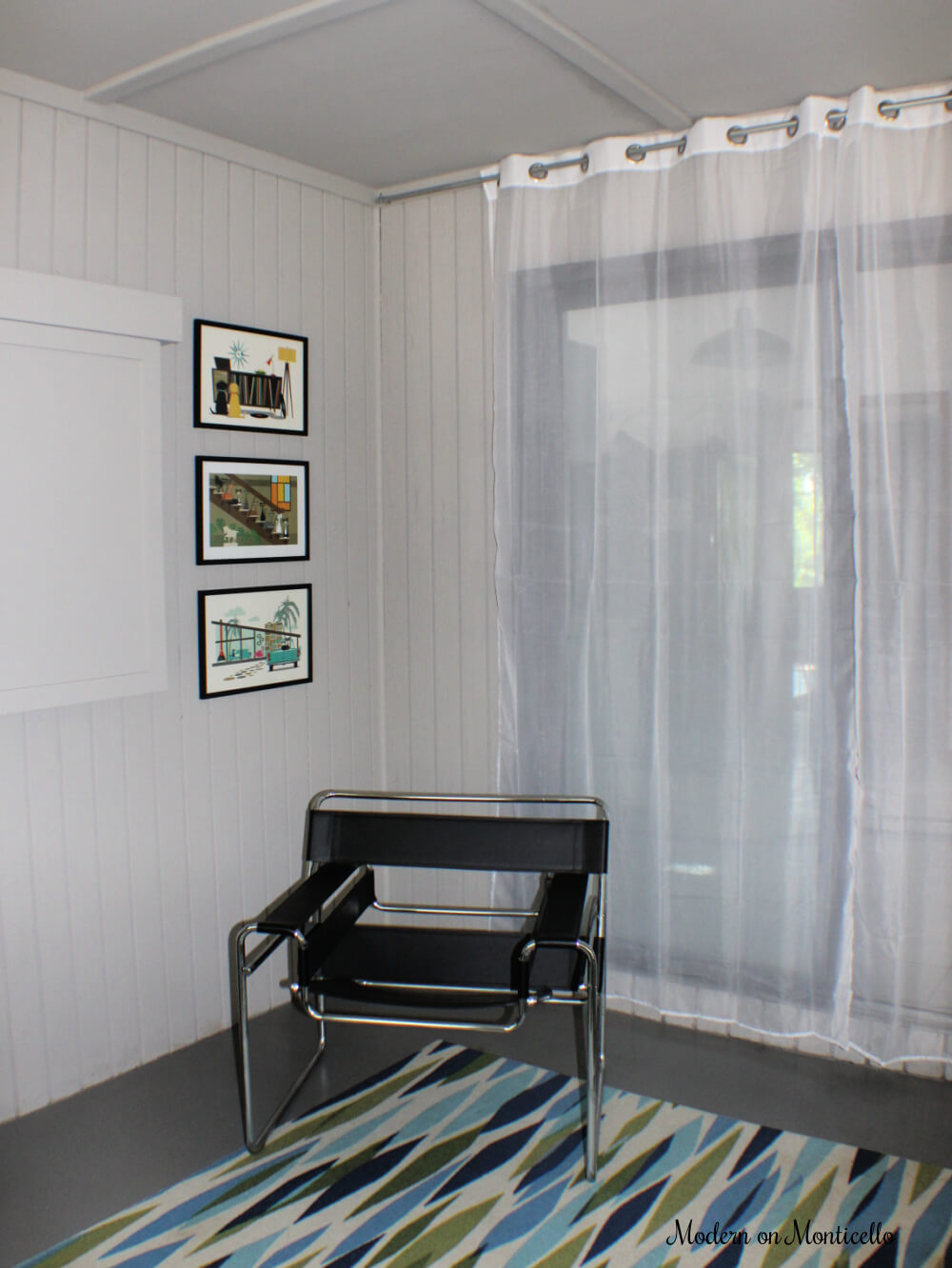 Thankfully, the electrical conduit pipe is strong enough not to need extra brackets to hold it up along the length of the pipe so the drapery panels still have more movement this way. 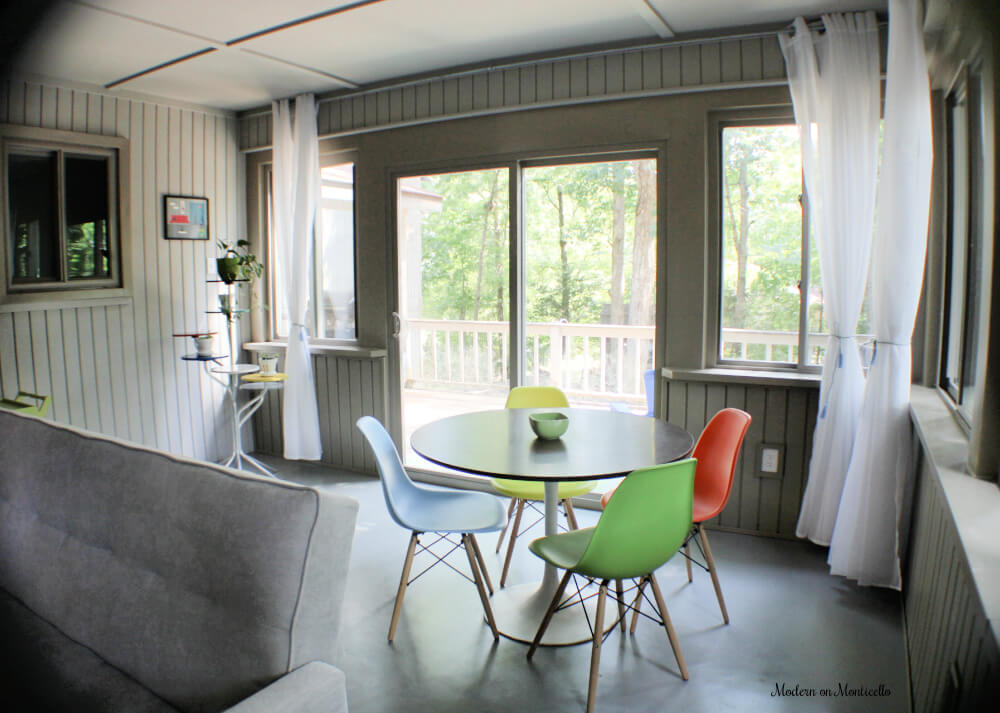 The look of the room can change with the placement of the panels whether open or closed. 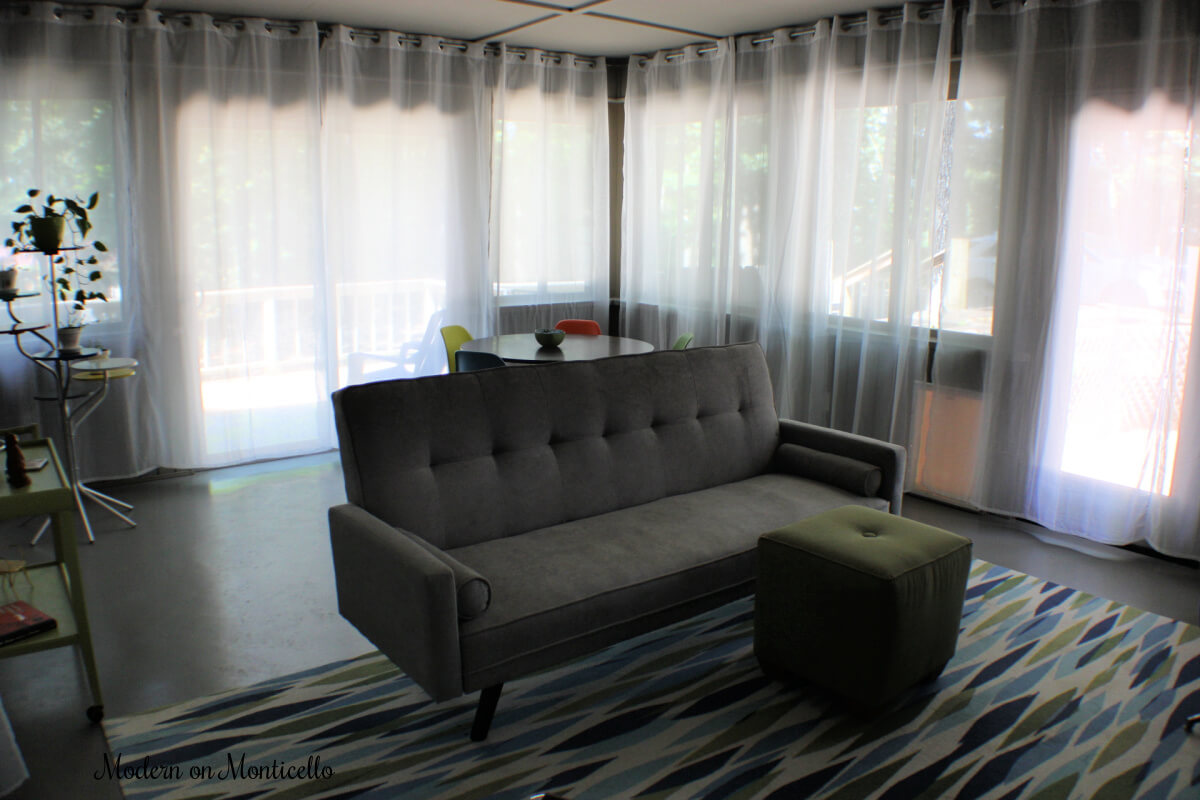 These panels also give an added benefit of softening the room as well. 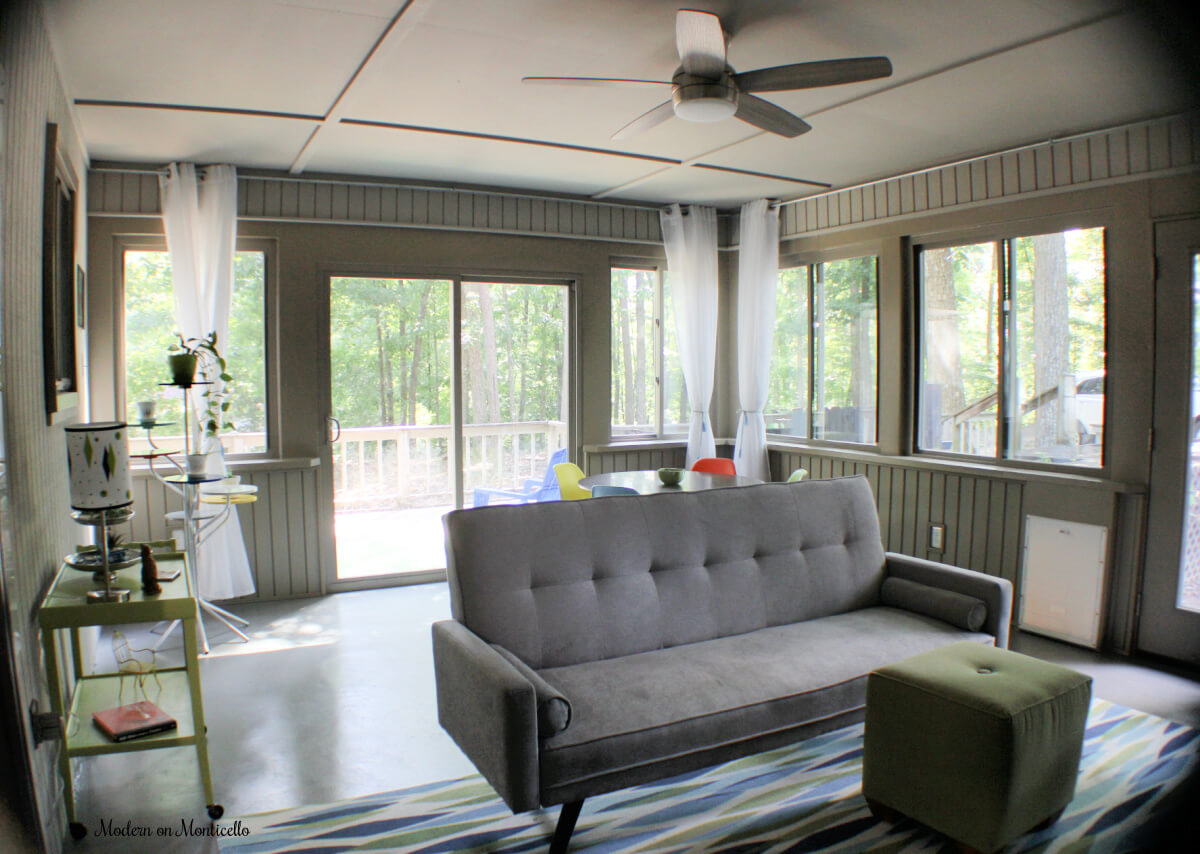 The best part, this DIY electrical pipe drapery rods cost less than $50 to make and install. Much less than I would have spent trying to find drapery rods to go the length of the two long walls.

This type of drapery rods may be too industrial for some rooms, but it blends nicely with the architecture and style of my mid century modern sunroom.

DIY Footed Bucket Planter
Things to Fall for: Fabulous Finds in Fall Decor Online
Pallet Sign and Planter All In One