With a little creative DIY effort, I was able to update some plain magazine holders into decorative storage for my desk.  This project just takes fabric and Mod Podge to make a pretty fabric covered magazine holder. 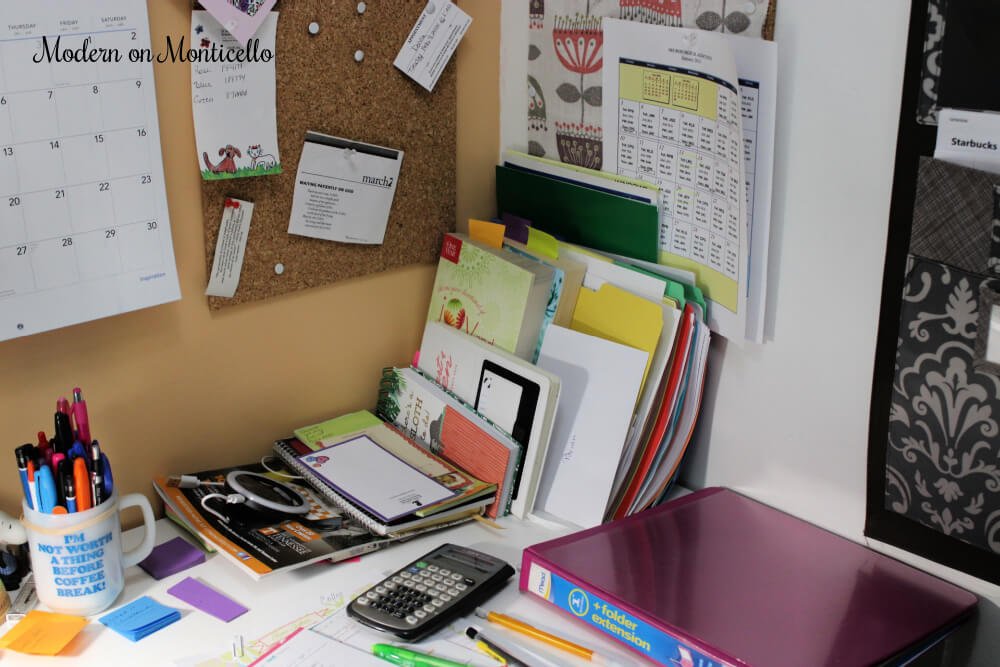 My desk is a mess!

No matter how often I try to straighten up the stacks of project folders, notebooks, memo pads and post it notes, it always looks messy.

Most times, the items that would continue to fall over would then be haphazardly tossed on the top shelf and get lost up there and then forgotten.  Not a very good system to work with.

Recently, I found these great magazine holders at Target in the Dollar Spot section – for only a $1 – and put a couple of them in my cart because of course you can always use these types of things.  Especially at that price. 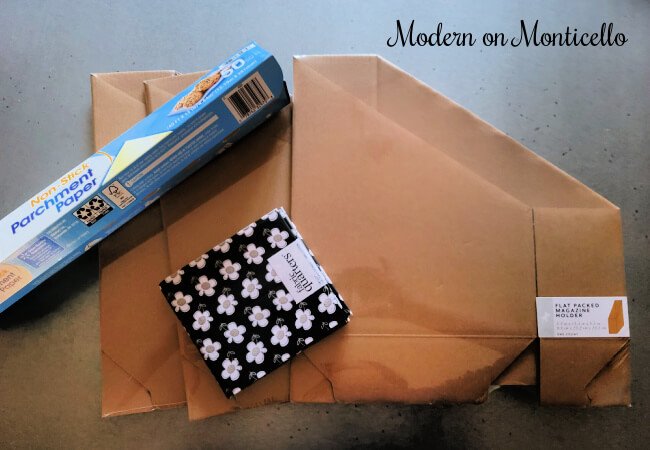 And as I home décor and DIY blogger I just couldn’t use them as plain cardboard boxes.

They are perfect for an easy DIY project to make my desk look organized and pretty.

Fabric is the best way to cover and update the plain boxes and so easy to do too. Originally I had planned to use these adorable black and white fabric squares for this project, as you can see in the photo, but the fabric was actually too small for the project.

Instead, I switched over to fabric I already had on hand and that I had used in the past for fabric covered notebooks.  Now my notebooks and file folders would match at my desk anyway. 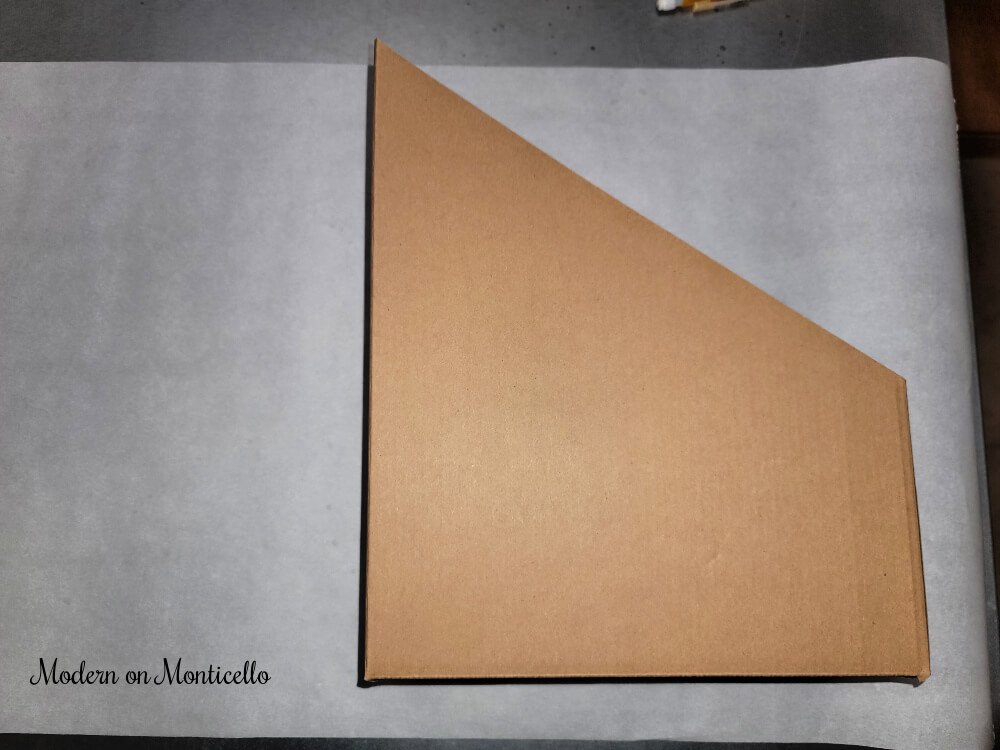 The first thing I needed to do was make a template to cut out the fabric. Using parchment paper I had in my kitchen supplies, I laid out a long piece and traced the outline of the magazine holder with a pencil on to the parchment paper. 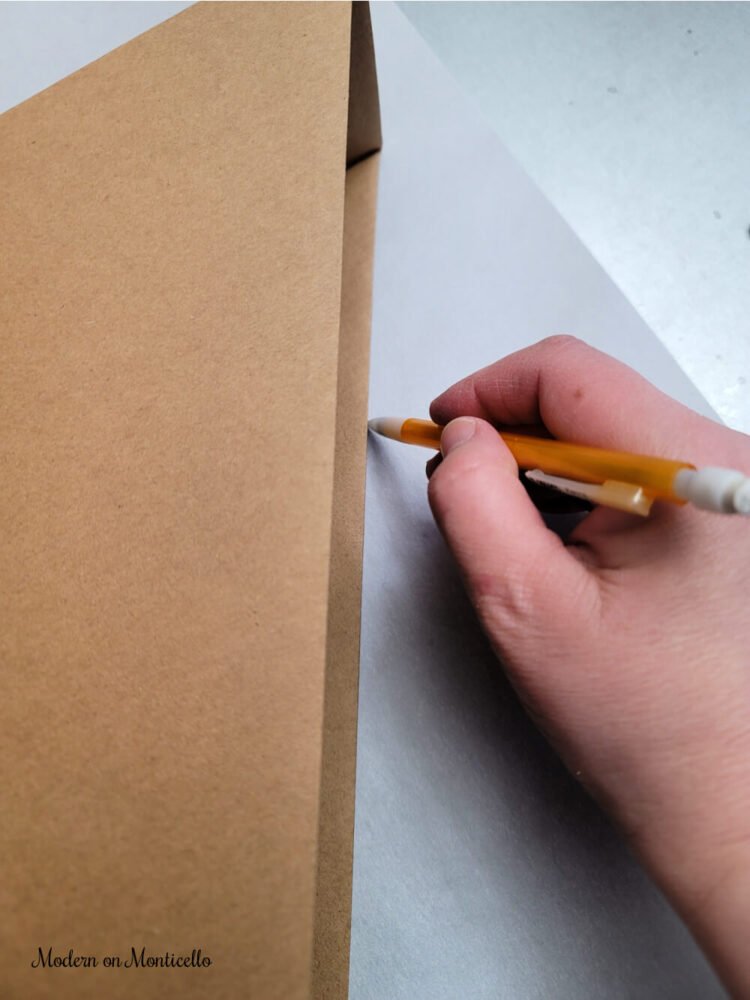 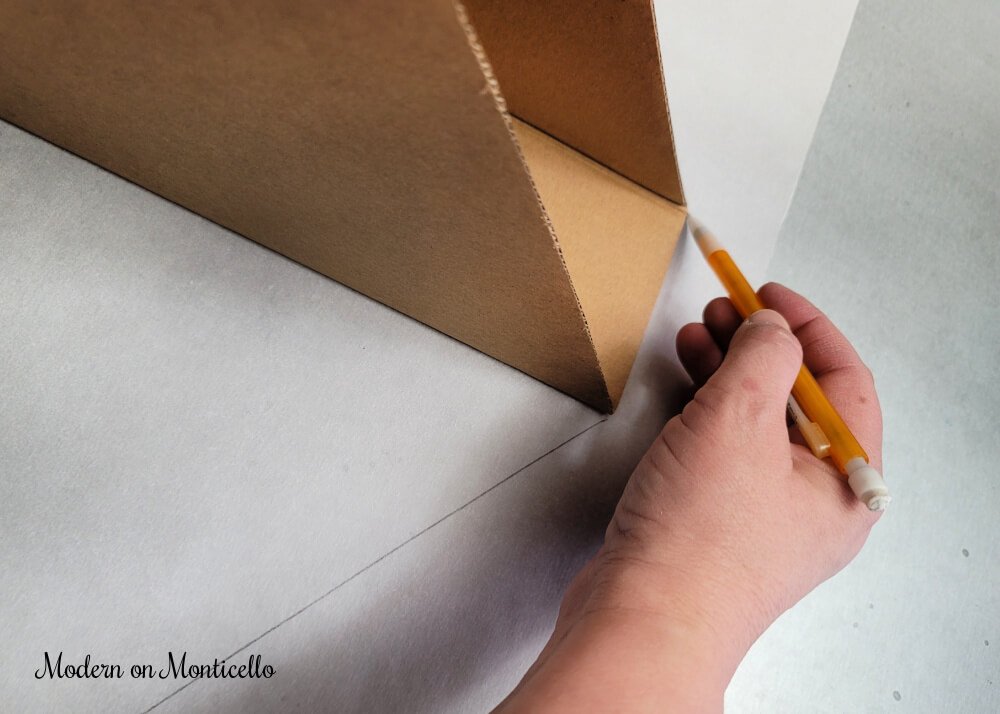 For around the basic outline of the box, I measured out two inches around the outline for extra width on the fabric. 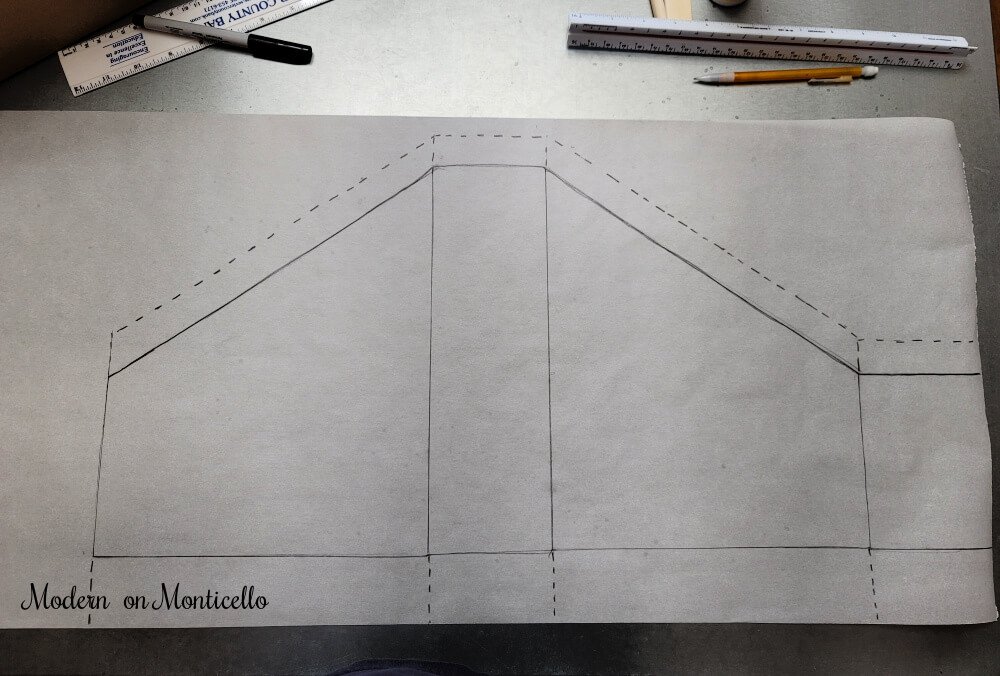 Then I cut out the template to use as a pattern for the fabric cutout. 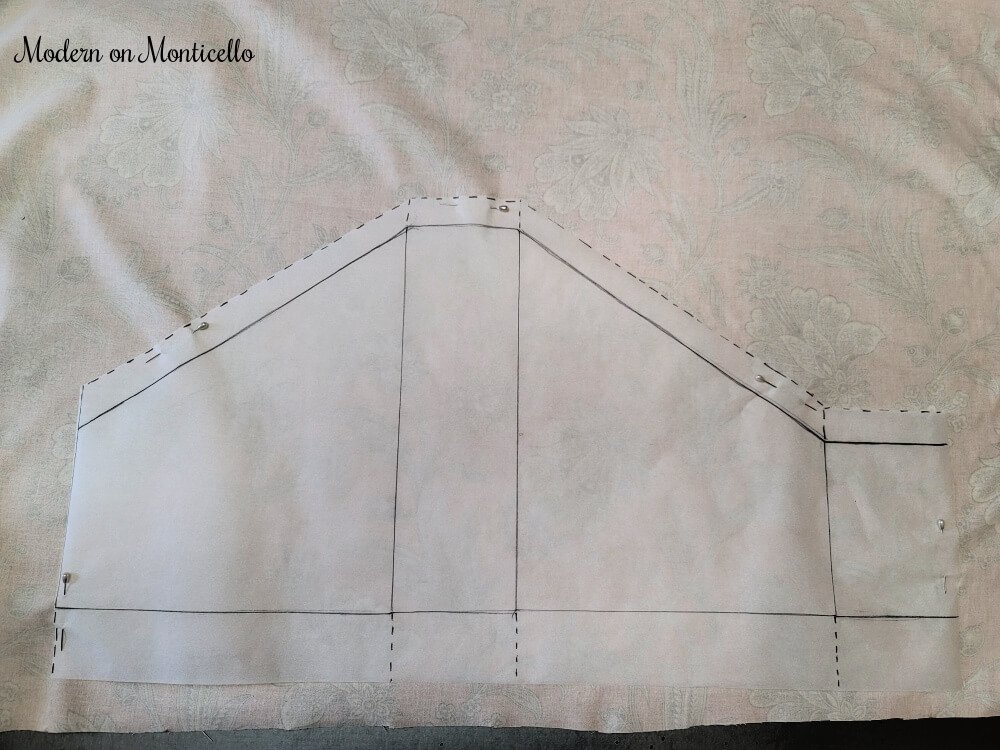 Pinning the pattern down with large straight pins (leftover from my daughter’s wedding) I then cut out the fabric for the cover of the magazine file box. 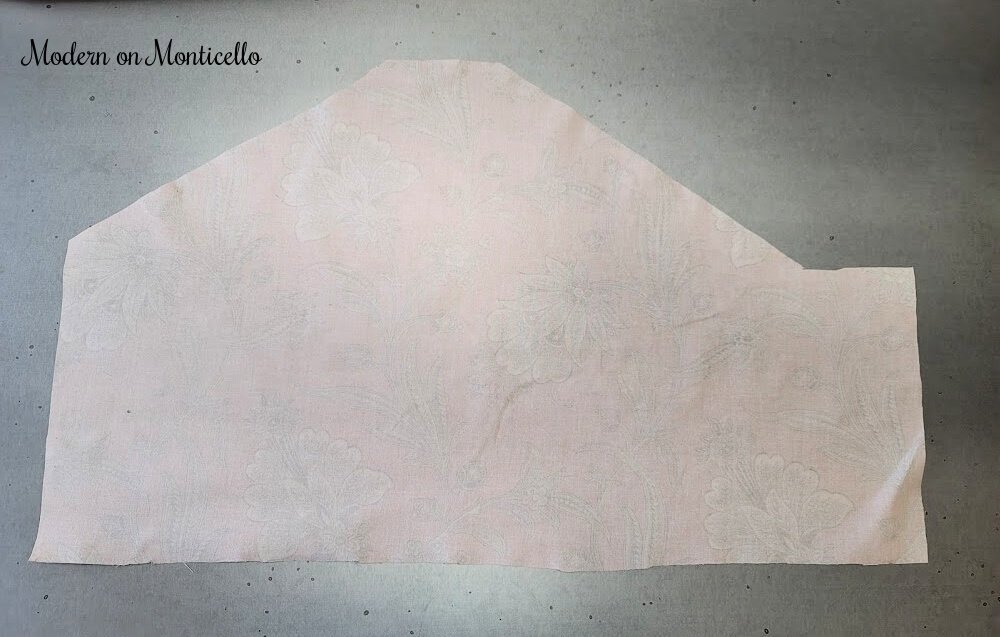 I used Mod Podge for this project instead of glue because it is so easy to work with.

Covering one side of the magazine holder with Mod Podge, I attached the fabric to the holder, applied Mod Podge to the next section and repeated the process all around the outside of the holder until it was covered.  I sat it aside and allowed the Mod Podge to dry for at least 30 minutes. 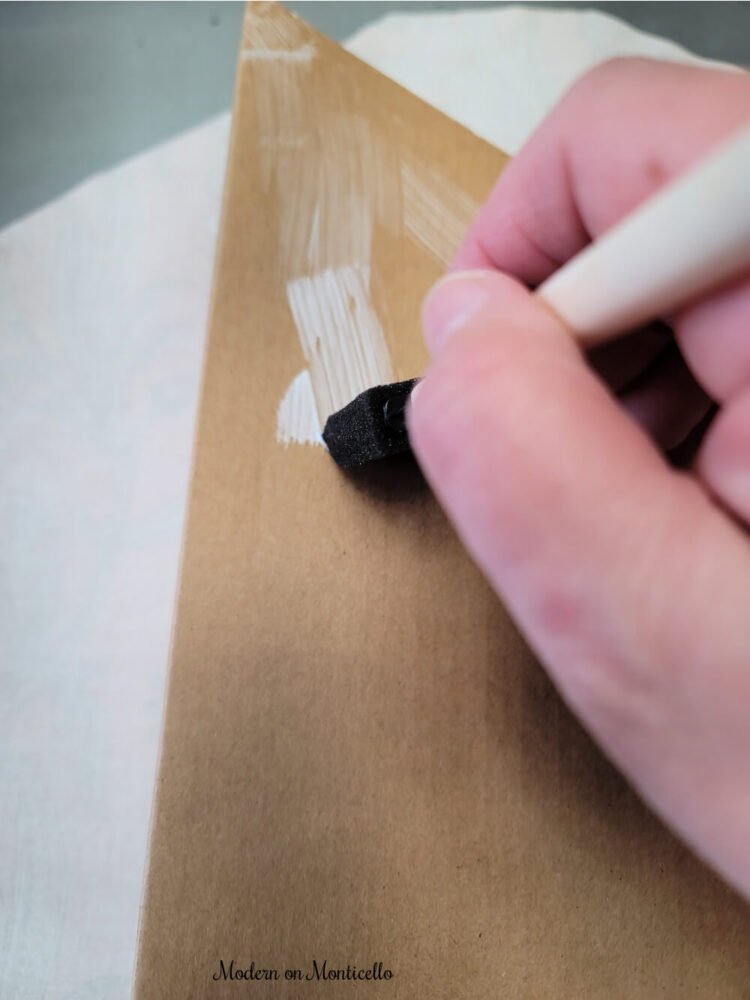 Wrap the bottom of the magazine holder like a present in four easy steps. 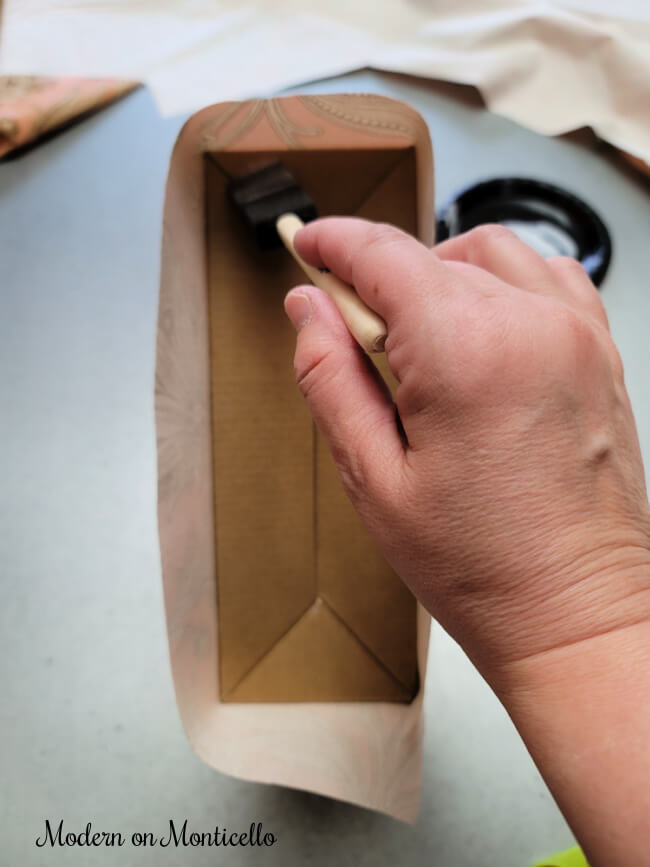 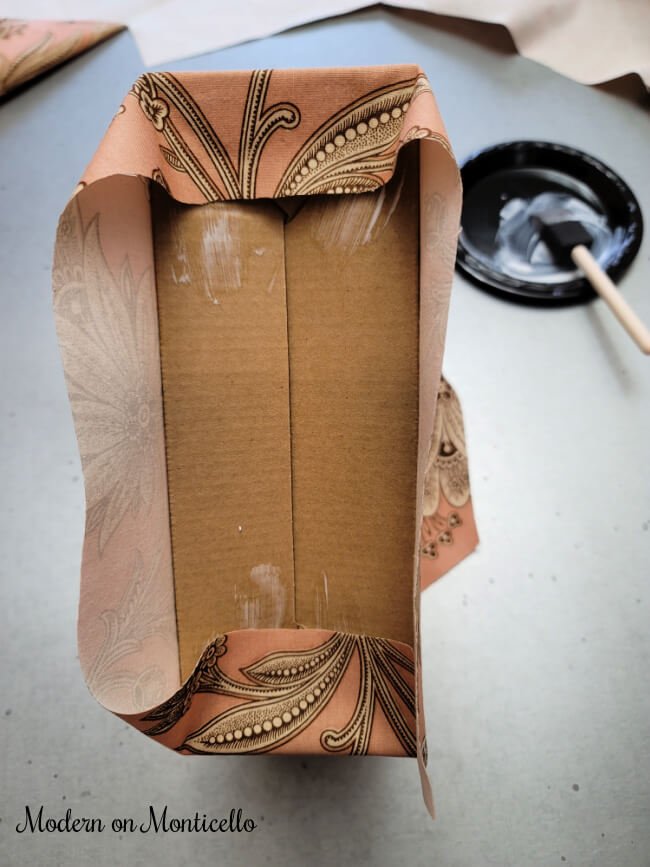 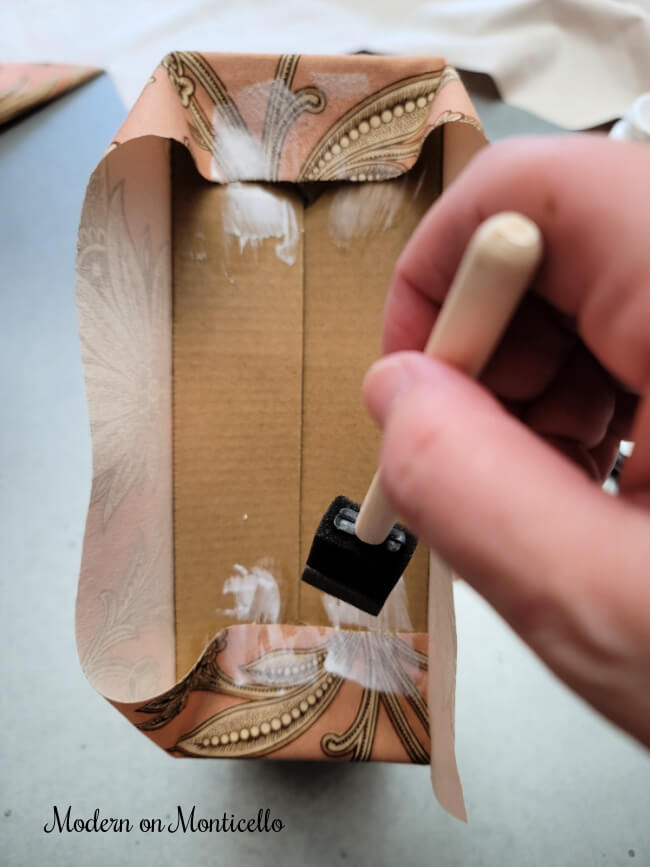 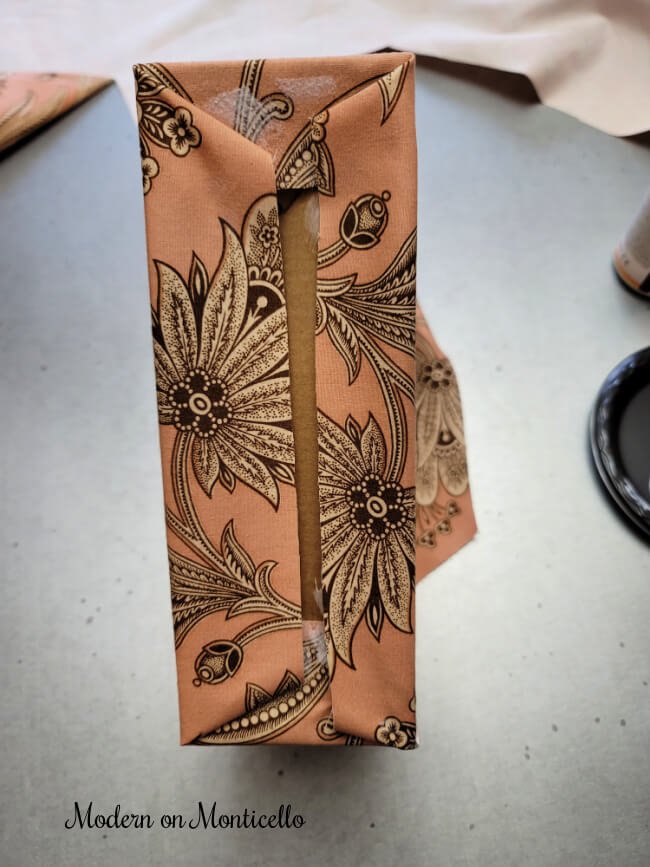 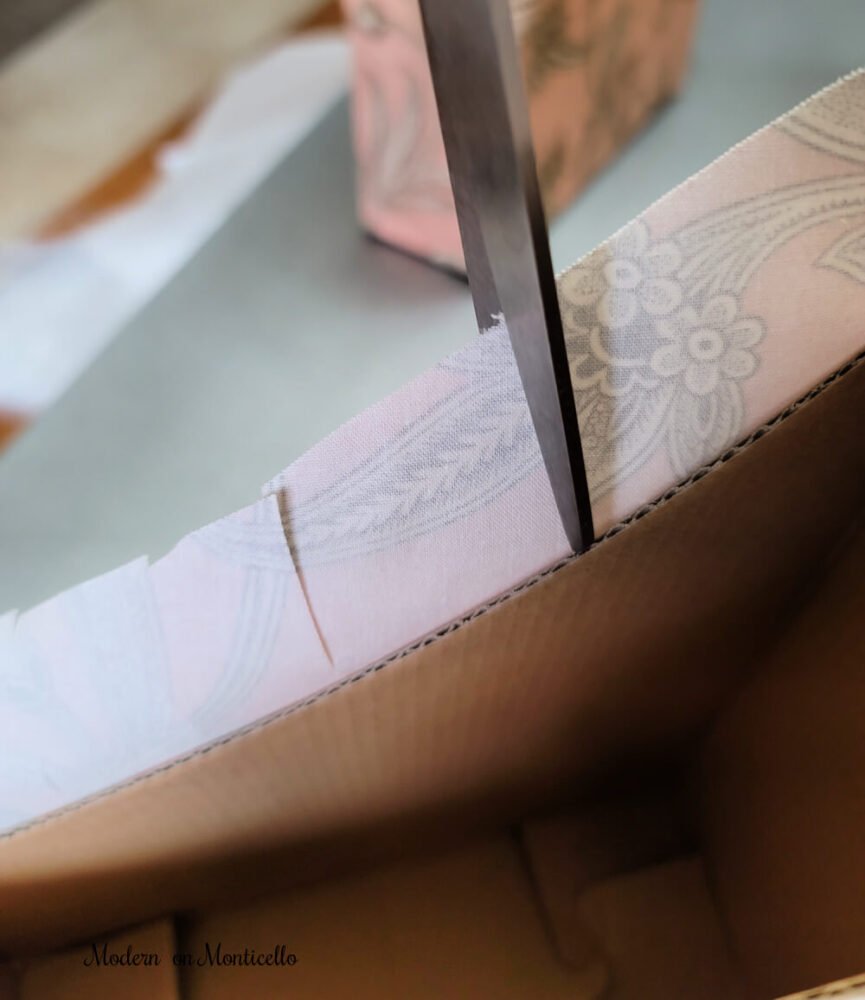 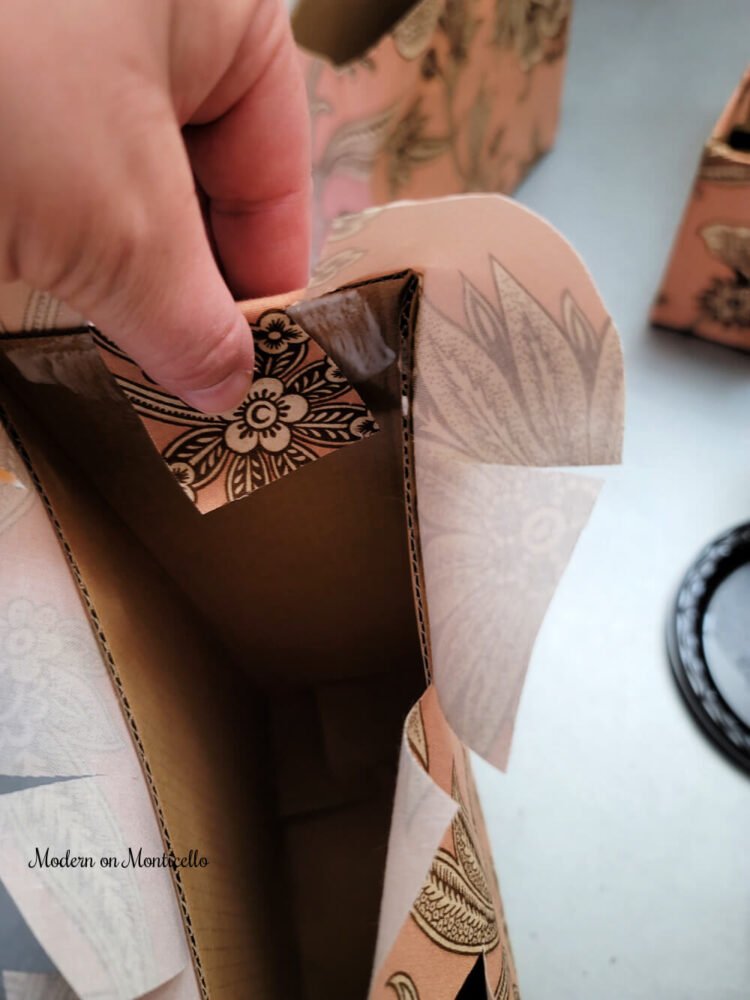 The last thing you could do is cut out cardstock to cover the inside of the boxes, but the color of the inside of these boxes didn’t bother me that much since no one was going to see them except me.

However, I did decide to put a layer of white Duck tape over the edges of the fabric inside the box to just to keep the fabric from pulling lose each time I pulled a folder in and out of the box.

You can make the inside more decorative but for me these boxes needed to be more functional than decorative for my desk. 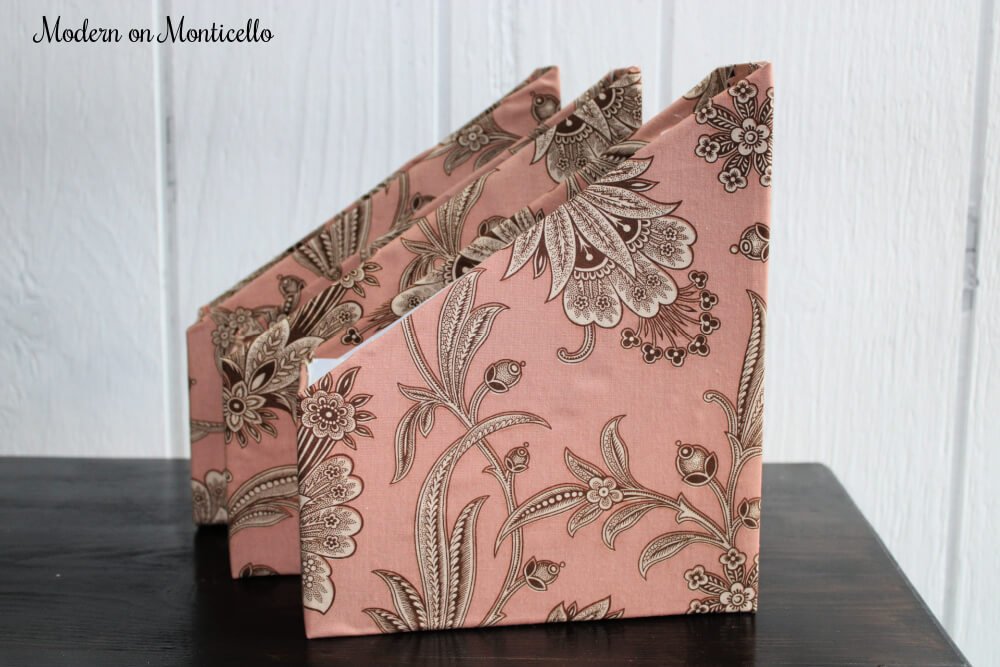 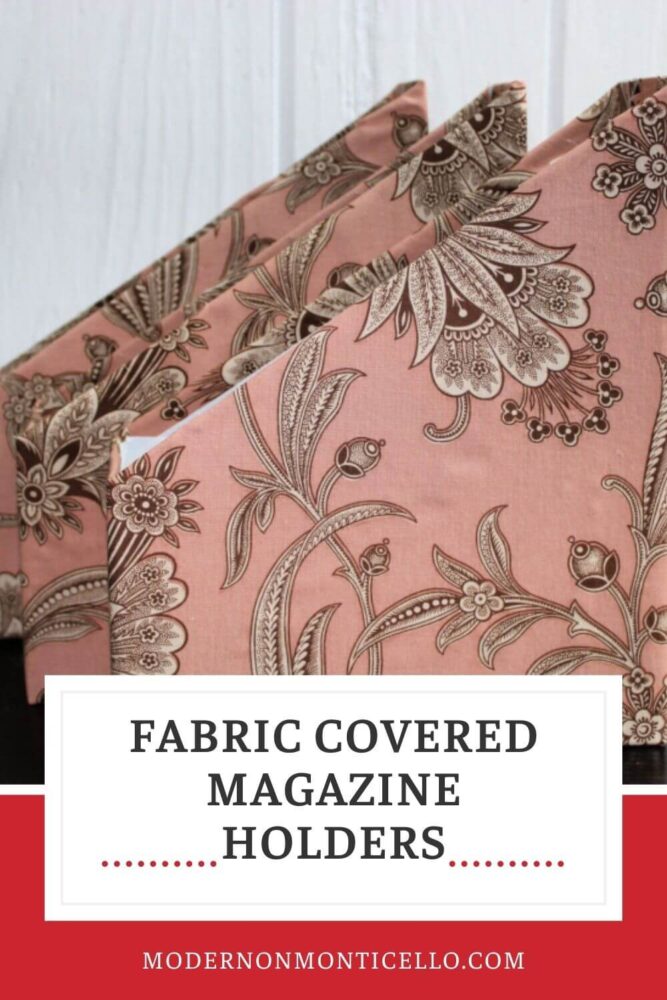 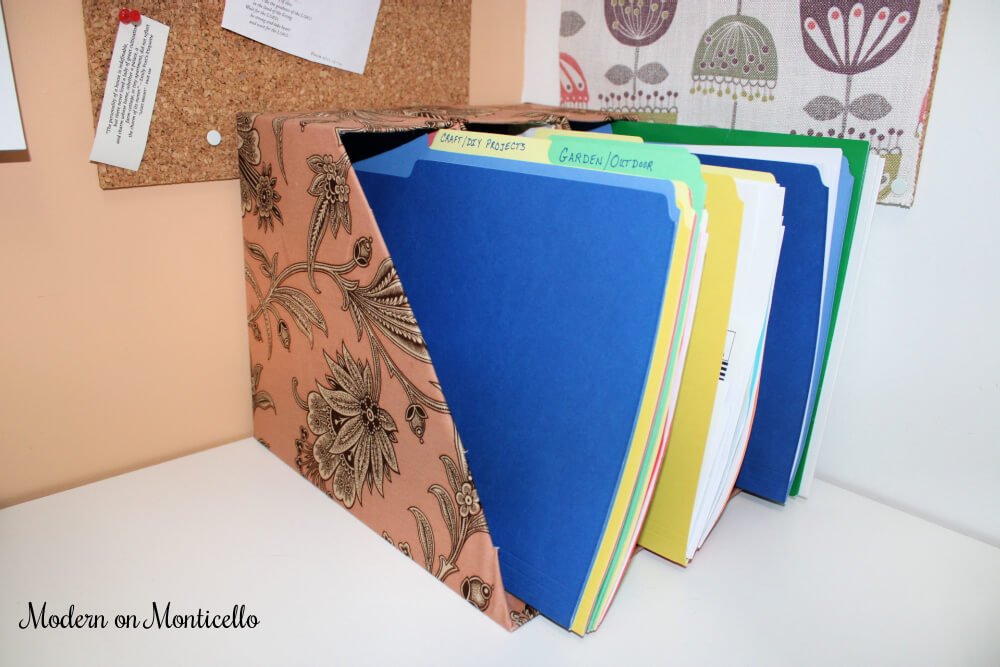 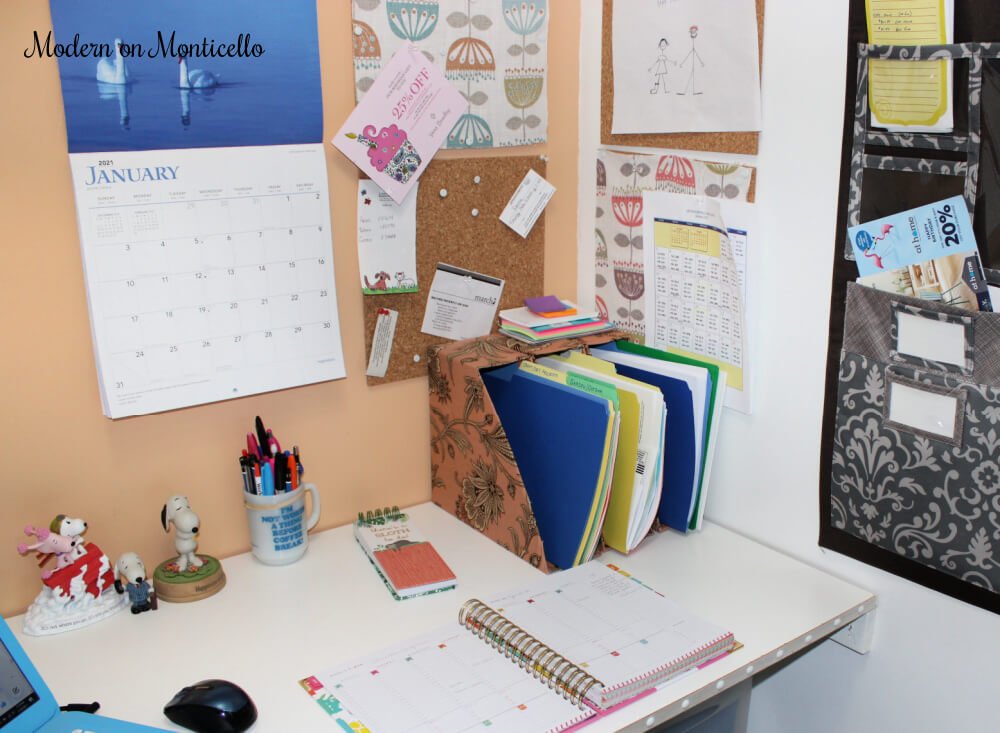 Now my desk looks a teeny bit more organized with the matching fabric covered notebooks on the top shelf.

“She is clothed with strength and dignity; she can laugh at the days to come.” Proverbs 31:25 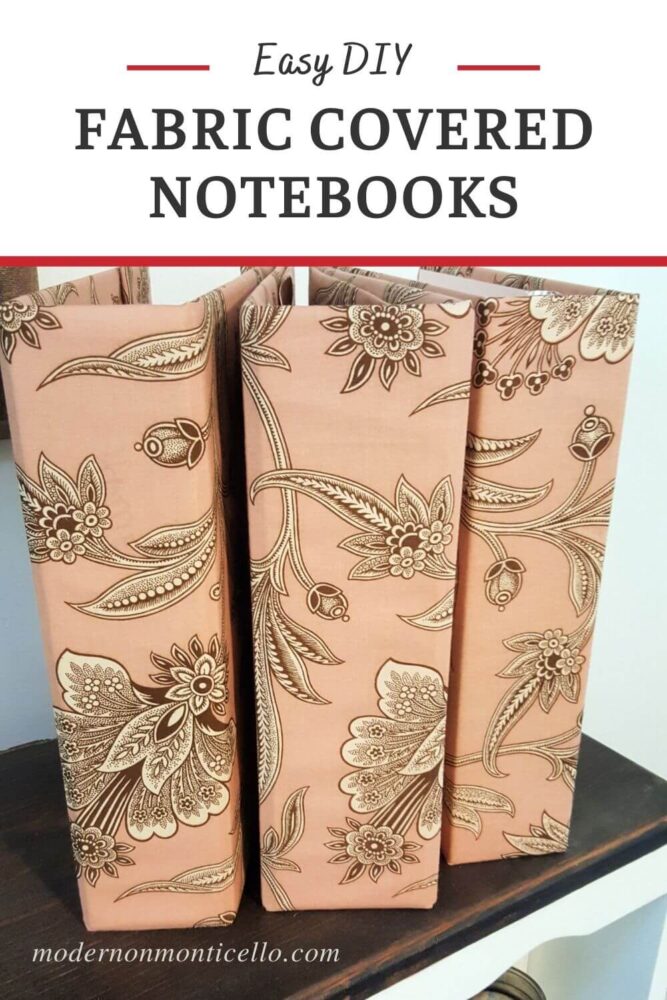