Today’s post is a guest post from my son, Mason Dakota Powell, who is a Pastor and Author.  His second book, The Illegal King is now available for purchase on Amazon.

This post contains affiliate links which help to support this blog. 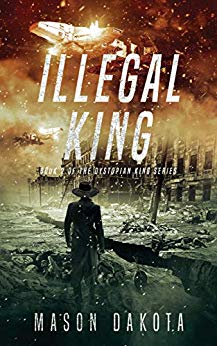 A good story has some sort of theme and backstory to how it was created. Think of some great ones like Harry Potter, Lord of the Rings, even Star Wars. There are messages within messages and a story of just how it came together or what inspired the writer that are exciting to hear about.

My recent book has this element. Now I am not trying to push that my book is a good story, or in the same category as those writer giants mentions before. I’ll let you read the book for yourself and see what you think. But what I do mean is that my series does have a theme to it, a theme I find rather powerful playing out across the books written and yet to be written, that excites me.

To understand what I mean, I have to explain a bit about myself. I grew up military family, and there are some unique characteristics and observations about the world and reality that affect those in my experience, such as fear, hope, loneliness, deduction and observation, maturity, anger, and the need for action that produces results for change. Certainly, these elements can be acquired from anyone, but for me my background growing up made these very strong in me.

It made me look at the world, feel and observe the anger and fear playing across the spectrum of our lives and it matured me faster than most, with a sense of the world I find others seem to lack. The only way I could process everything I was seeing and observing was to write. So, I did.

I began in simple fashion, writing short stories and comics with a buddy of mine about our favorite video game characters and super heroes. I wrote the scenes and he would draw them out, and we would try to get some of our classmates to read our copies. They were bad and nobody but us ever thought they were great.

Eventually my talent for writing grew and I tried to pour in what I was seeing and feeling deeper into the pages I scribbled upon. It was an outlet for me, where I can pour out the darkness, I felt both in myself and around me upon a page and find I felt relieved and refreshed. I could smile again, and started to see others smiling back.

The actual inspiration for my series, The Dystopian King, was birthed first my senior year of high school when I wrote my first book, Nobility, as part of a class project. Well technically it was just the first chapter and not the whole book, but when I got glowing remarks about it, I poured my time and energy into writing and eventually publishing my first book.

I wanted to fill the pages with the experiences and emotions I felt growing up, but I wanted to create a series with a deeper theme pouring out of the pages in a subtle style. I read greats, like Tolkien and C.S. Lewis who had a tremendous message to share, but shared it in a way nobody picked up on or that was masterfully crafted in that it wasn’t distracting to those opposed aggressively to the scene.

The possibility of writing something like this excited me. I had the motivation and the goal, now I just needed to figure out the message and theme.

Then I started Bible College and found my theme. I started sitting in these classes and listening to professors talk about the Gospel and what Jesus did and it astounded me. All my life I grew up in the church and heard these stories, but I was hearing themes and messages and ideas from the Bible I had never experienced before and it amazed me how I missed so much growing up. In some ways I felt upset thinking someone had been keeping such joyous truths hidden from me. To see the whole picture of the Bible and see how God worked in a world of darkness to be our source of redemption and light inspired me. And not only that, but also a picture of what the church was supposed to be and is in the world.

Right then I had my theme. I was going to write a thriller where there would be characters who represented different traits and characteristics dominant in humans, a character who represented the church, and another who would be my Christ figure in my story.

I used my first book, Nobility, to play into this world, to set the stage for what would come in the rest of the series, establishing roles and character development, all in preparation of my next book I was writing throughout college. I wanted to share a message about self-sacrifice, redemption, the desire to change and overcome who we are and the discovery that all these things are not achievable from ourselves but given to use by a stronger being, and write about it all in a way that was subtle and missed unless you paid close attention to it, that way those who believe differently than me can still enjoy the story and yet maybe learn a bit a truth as well about the world.

At the time I wrote the second book, the world was in a crisis of fear and panic about the Ebola virus, so I played into that, not just because it makes for an exciting thriller, but because it helped to represent a dark force invisible to our eye but powerful enough to crush us and bring us to our knees with begging for redemption and change.

So, I took my main character, Griffon, the embodiment of humanity’s drive and desire to change and the hopeless nature we have to become our own worst enemies, and I made him suffer. I beat him up, I crushed him, I took away his hope and desire and left him broken, all so that my Christ-figure would shine greater, facing the same trenches of hell Griffon went through and yet emerging as the superior being, the hope which saves and redeems on the basis of his own righteousness and not ours.

This is a theme I am playing out across the series, and the usage of Illegal King in the series toward this goal is vital because it is the turning point for the series, where the Christ-figure of my series emerges in the light of humanity’s darkness.

It might not be the best story, or the most well-received by the observant individual picking up on my hidden themes, but it is what inspired me to write, to express a sense of hope even in the bleakest of times when we emerge as our own worst enemy and salvation can only be found from a source outside of ourselves.

Matthew 6:33  “But seek first his kingdom and his righteousness, and all these things will be given to you as well.” 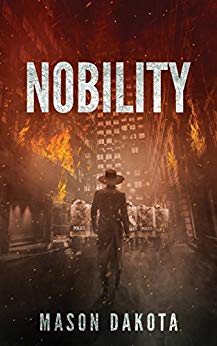