The need to replace two dog chewed pocket doors is what made this project necessary in our entryway.  Participating in the Spring One Room Challenge® gave us the motivation to finally get it done.  This week’s post is all about the doors! 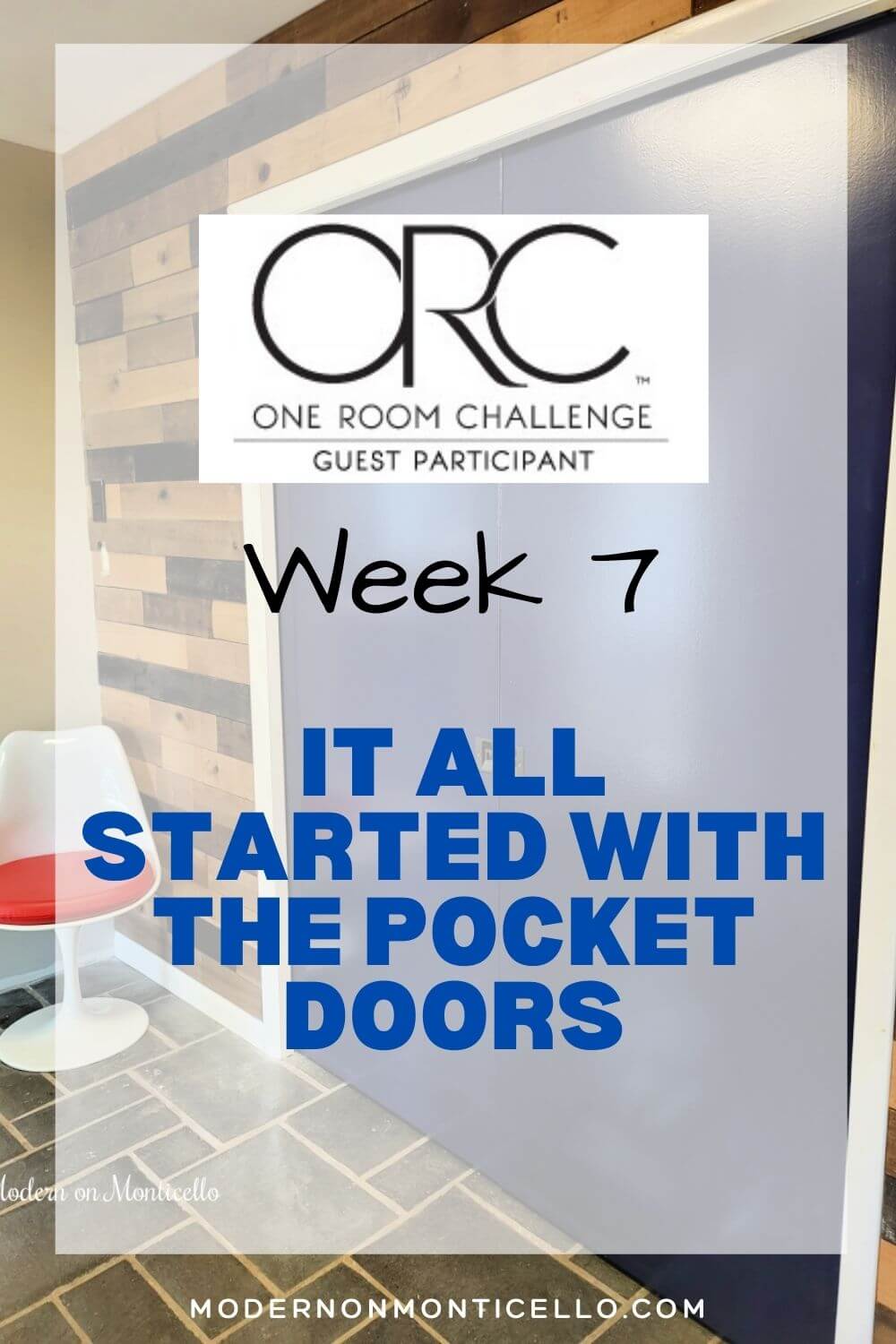 Welcome to Week 7 of The One Room Challenge®. 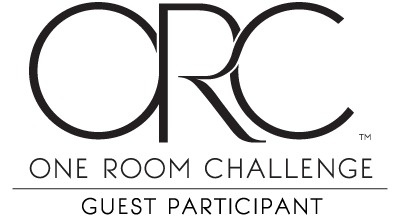 Replacing these four pocket doors definitely turned out to be the biggest challenge for this project in so many ways.

First, we couldn’t install fancier doors with decorative molding like I originally dreamed of because the openings in the walls were just too narrow.

The walls were installed after the hardware and doors were installed over 40 years ago.  Widening the space or removing the entire side walls was not an option either since we have a drop down floor in the adjoining living room.  The only option we had was to purchase new hollow core doors.  Finding the same width size took some searching and several shopping trips since most newly built homes these days do not use flat hollow core doors like these that were used in the 1970s.  We found some at Lowes that fit a bit more snug in the walls and are heavier but they work so that is all that matters. 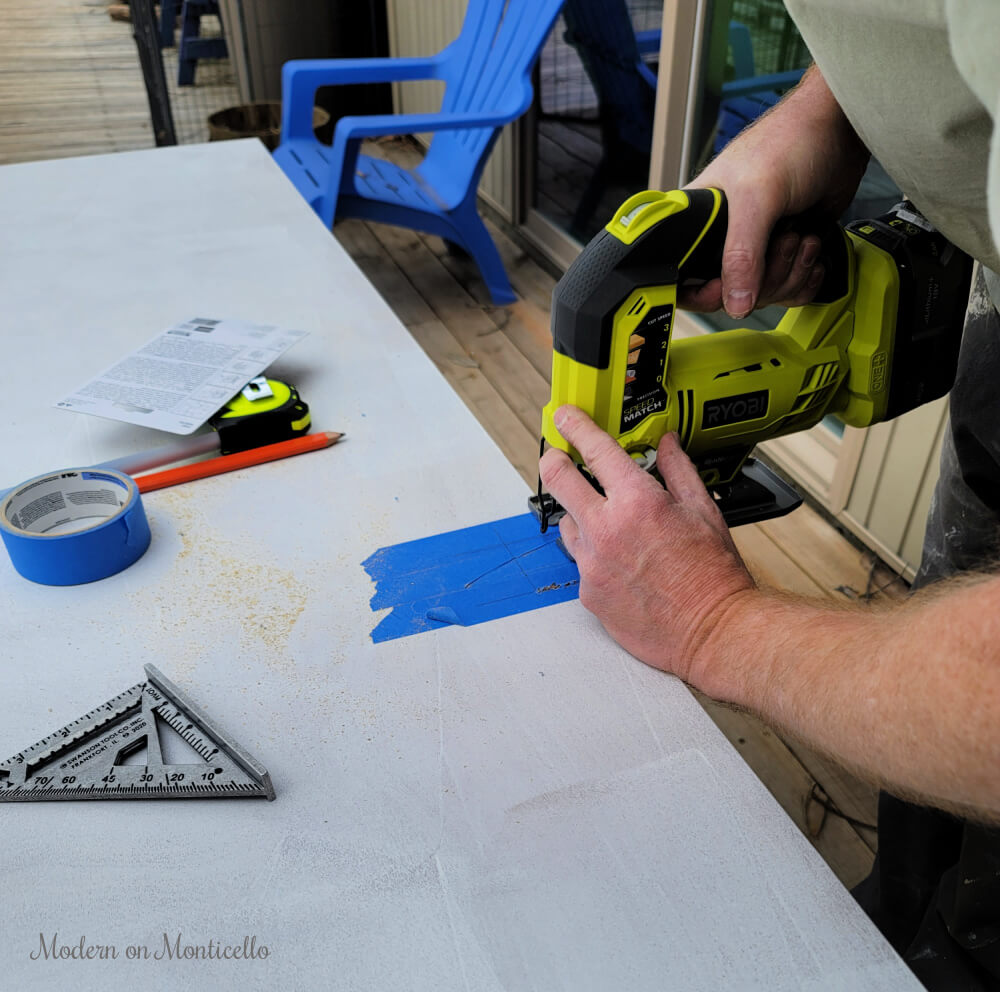 With new hollow core doors purchased, our quest to make the new doors a focal item for the entryway makeover lead us to the paint color to achieve the visual effect.

Before this project even began, I knew I wanted a deep rich navy color for all of the pocket doors.  We settled on Behr Academic Navy in a oil based glossy finish.

No matter what color we chose, the paint had to be very hard and durable to withstand any potential scratches from four large, rambunctious and often impatient dogs. And active grandchildren. 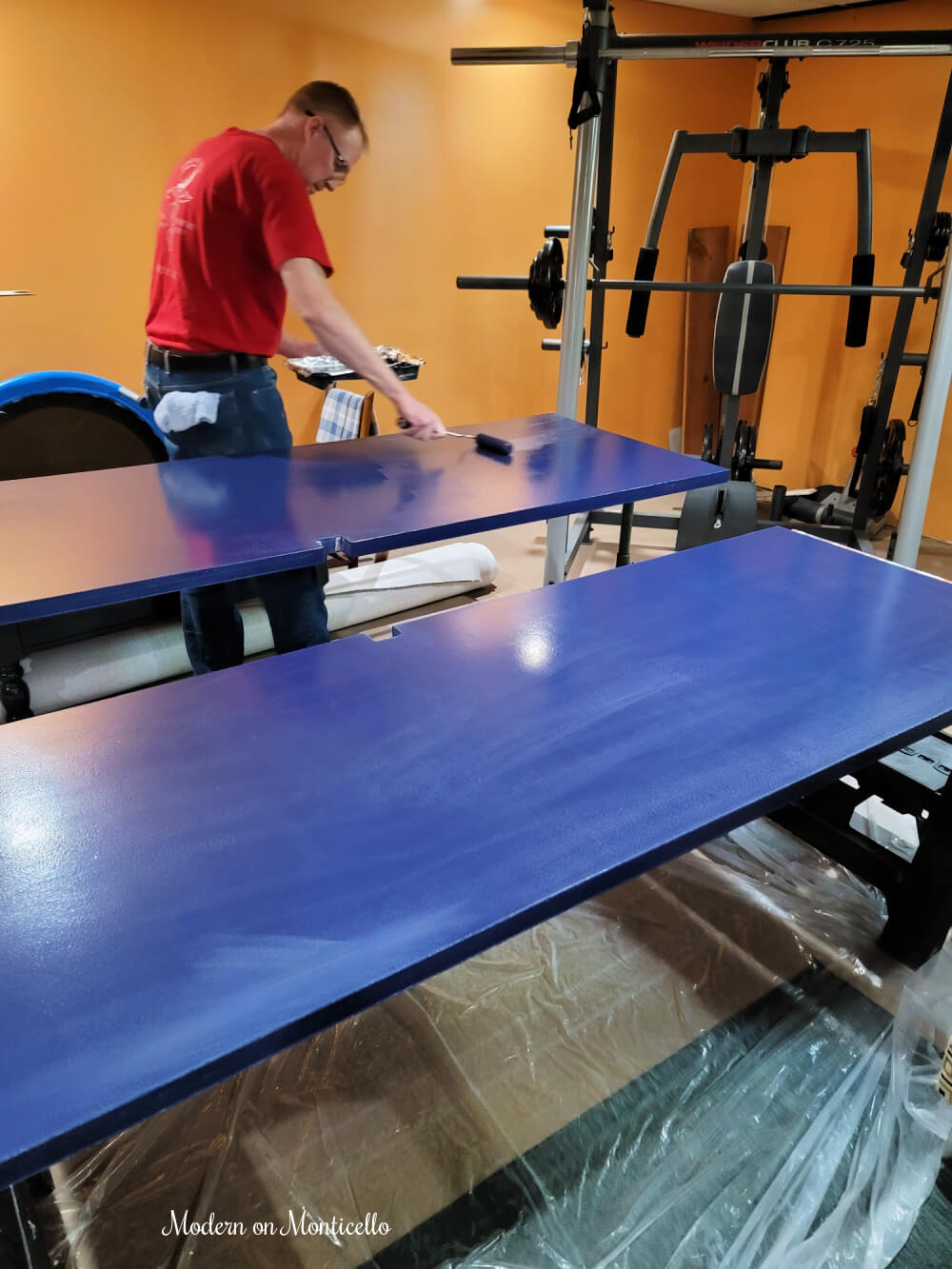 Since I am in a boot for tendonitis, my husband did the majority of the heavy work on the pocket doors.  I was just the shorter assistant helping to flip over the doors between each coat of paint.  My husband’s perfectionist attention to little details may or may not have been a factor in that decision as well, but I won’t comment much on that.  Except to say I appreciate it and the final outcome of his projects because of it.

For a couple of weeks around his busy schedule at the hospital, he patiently applied 3 coats of the paint and 3 coats of polyurethane to each side of the four doors.

Since oil based paint takes much longer to dry, the process seemed to take forever!  But we both stuck with it.  Most nights when he was home from work, he would apply another coat of paint or polyurethane to two of the doors set up on sawhorses in the basement, allow them to dry for a few hours. Then we would go downstairs, flip them over, and he would apply paint to the other side to allow it to dry overnight.

Then this week, we had a summer ministry intern move in to our basement and so the whole production had to be moved upstairs to my daughter’s former bedroom and bathroom. 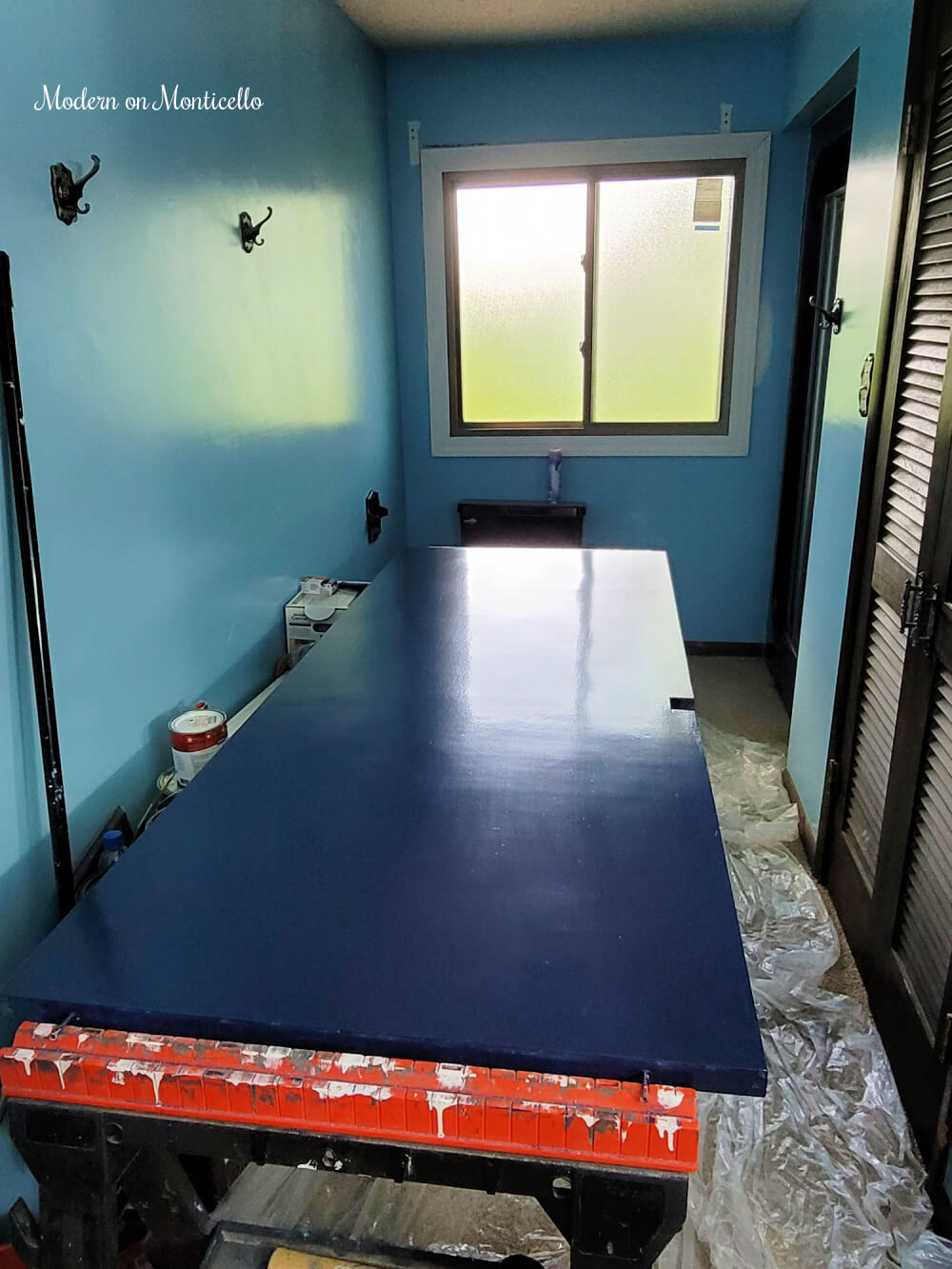 More delays and less room to work but the painting part of the pocket doors is done.  We both really thought that the painting would have been completed a couple of weeks ago, but delays happen.

At this time, two of the pocket doors have been installed leading to the living room. However, the challenges with these pocket doors is not over yet.

The next challenge was the pocket door hardware that we needed to work with the old tracks in the walls.

Since we didn’t remove and rebuild the walls around the pockets doors, we had to be able to use the tracks already in the walls.  The two doors leading to the living room were not a problem and he just installed the old wheels to the new doors.  Unfortunately, the two side doors leading the the kitchen and the hallway were not so lucky.  One set of wheels were broken and the other door the wheels were worn down and had this annoying high squeak when you shut the door.

While we were shopping for hollow core doors that could fit the opening in the walls, we were also struggling to find door hardware that would fit the tracks.  We ended up returning all of them and finding a company on Amazon that carried wheels that fit our pocket door tracks.

And then the shipment was delayed longer than expected.

Renovating an older home does come with these little challenges along the way.

With only a week until the final reveal the new track wheels and hardware have finally arrived. And as we have come to expect there is another snag in the door install – literally.

We will have to cut two notches in the interior trim of each door to install the wheels and the doors since this is a renovation and not a new build and the screws of the wheels won’t fit with the door frame trim in place.  With a new build you would have installed the wall boards after installing the pocket doors so the trim pieces wouldn’t be in the way.

This weekend that problem will need to be fixed before we can hang the last of the pocket doors for the full reveal next week.

The challenges were worth it though!  I just love the look of these dark navy doors combined with the new white trim and the rustic wood wall!  The combination of rustic and modern is exactly how I hoped it would look.  At least for the two that have been installed so far. 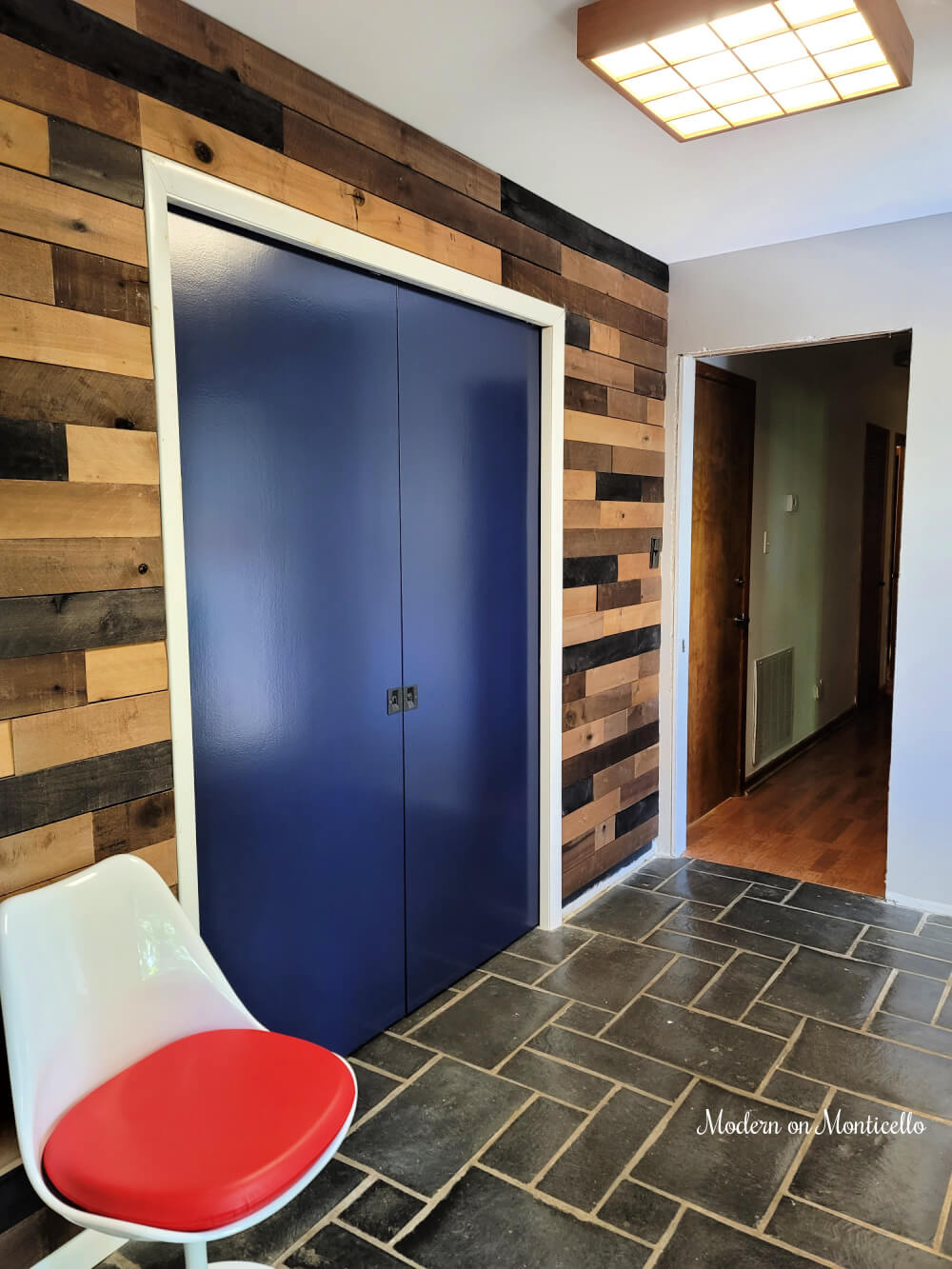 I promise that next week the room will be completely done for the reveal and for my family arriving for the Memorial Day weekend!

Romans 12:2 “Do not conform to the pattern of this world, but be transformed by the renewing of your mind. Then you will be able to rest and approve what God’s will is, his good, pleasing and perfect will.”