Several years ago a friend of mine in Texas gave me a Christmas ornament made out of felt that looked like old fashioned underwear and contained candy.  The candy holder/ornament also had a cute and catchy phase attached to it that said, “Went looking for a stocking and couldn’t find a spare. So we stuffed all your goodies in Santa’s underwear!”   Today I am sharing a remake of Santa’s Underwear Ornaments.

This post contains affiliate links which support this blog. 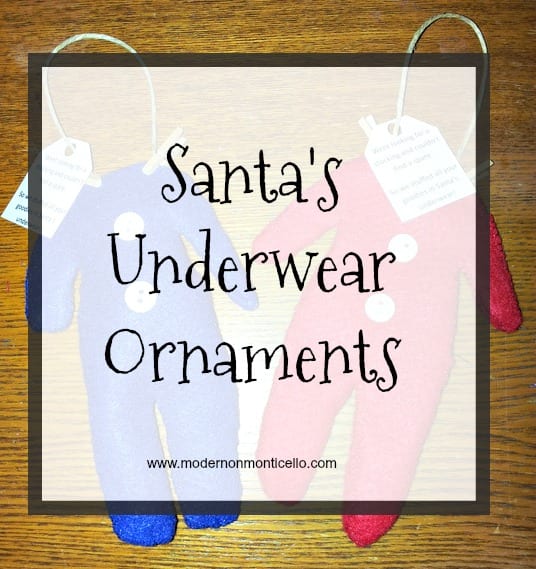 I have loved this ornament every since she gave it to me and every year when I would take it down off the tree I promised myself that I would make some of them myself, but never seemed to remember to do it during the year UNTIL I decorated my tree for the next year and would think to myself of how I missed that opportunity again!

This year I not only made the ornament but 22 of them for my husband’s coworkers!

For this project you will need

I first traced a pattern from the original ornament onto tracing paper and cut it out.  You can make the pattern by free hand yourself or print the image below on 8 x 11 paper.   I used the straight pins and pinned the pattern onto two layers of felt and cut out the form. 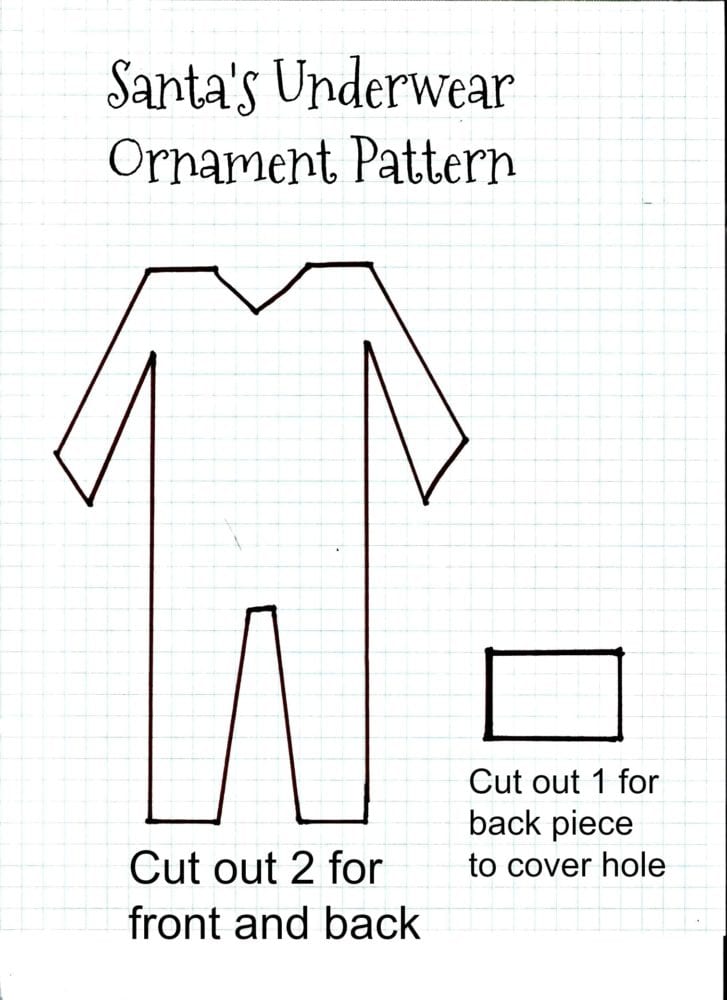 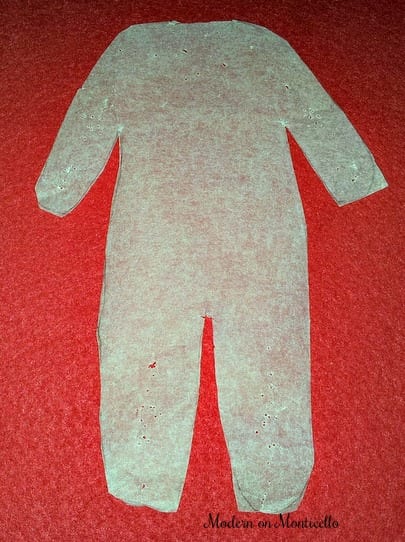 Sew the two layers of fabric together on all sides. 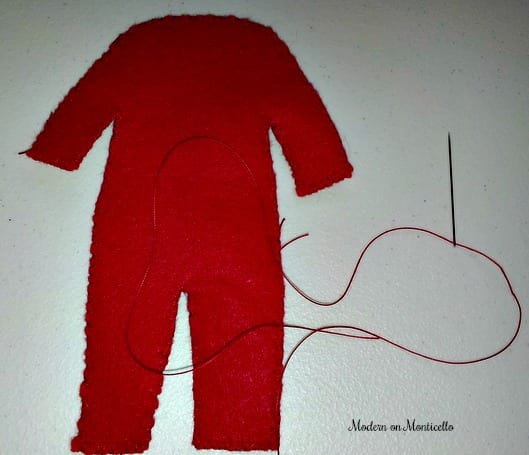 Once you have sewn together the two cutouts together,  cut a small square hole in the back of one of the layers and turn the “outfit” inside out.  You should now have a pair of Santa’s underwear. 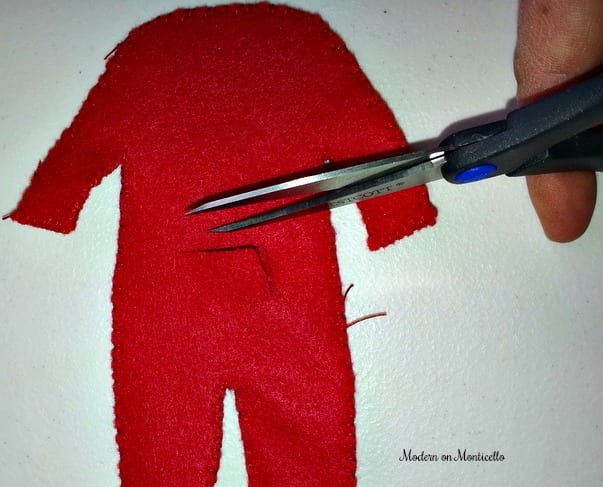 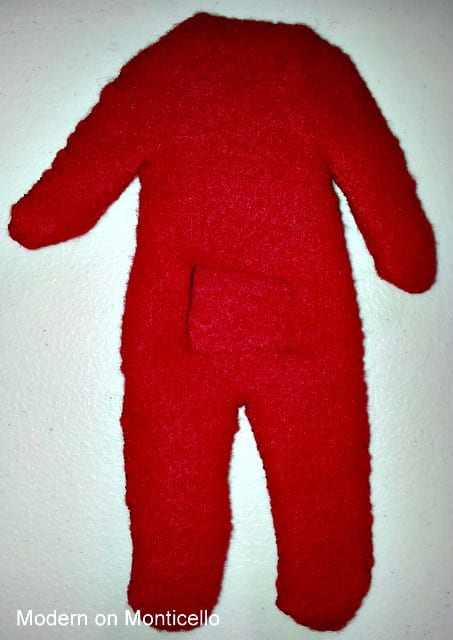 Cut a small square out of the white felt and sew it over the hole in the back of the underwear to resemble the back flap of old fashioned long underwear.  I found that it was easier to pin the white piece of felt in place with a straight pin and then sew around it. 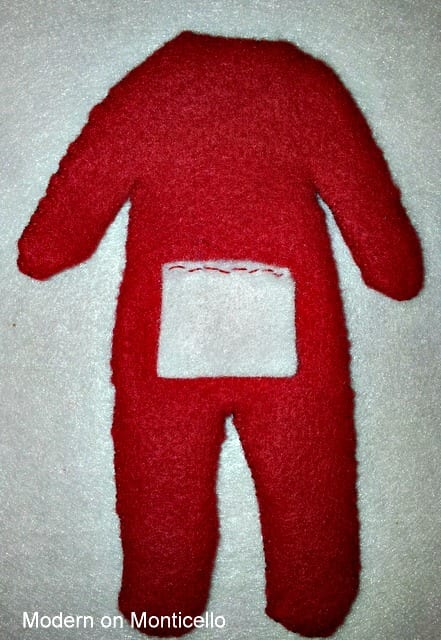 To make the ornament hanger, cut a small length of the jute twine and glue it to the shoulders of the underwear along with two miniature clothes pins too resemble clothes hanging on the line.

If you made your little notes similar to mine, slip the twine through the hole of the note before gluing the twine to the back of the underwear.  I made my notes on MS Word and used a craft punch to cut them out.  My original ornament had the note lamented and attached to the side with a safety pin.  You can choose to add the note any way that works best for you.

Below is the saying for the note:

“Went looking for a stocking
and couldn’t find a spare.
So we stuffed all your goodies
in Santa’s underwear!” 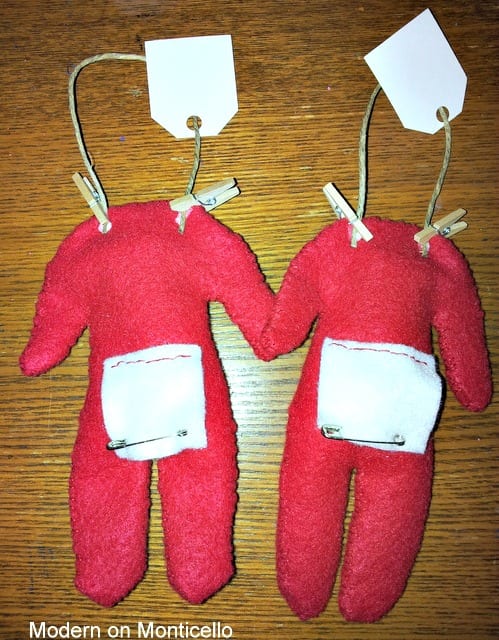 When you are done your ornament should look like this: 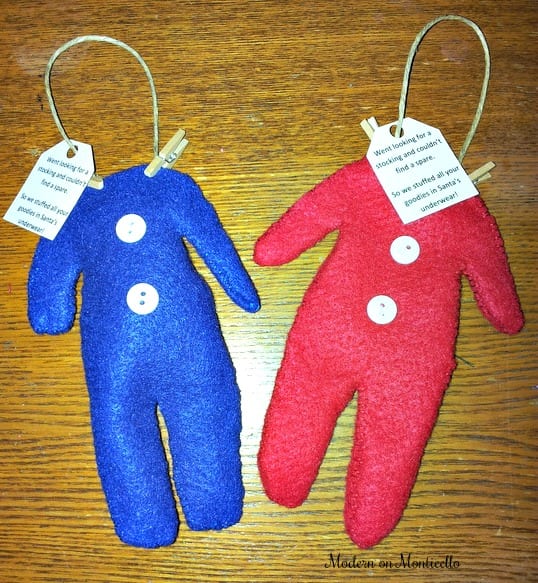 These are great for teacher’s gifts or coworkers in your office or just something fun to make for the kids.

“Our mouths were filled with laughter, our tongues with songs of joy.”  Psalm 126:2