The dining tables for my daughter’s wedding included tiny potted faux succulents.  To celebrate their first Christmas together, I decided to repurpose a few of these potted succulents into DIY Christmas ornaments. 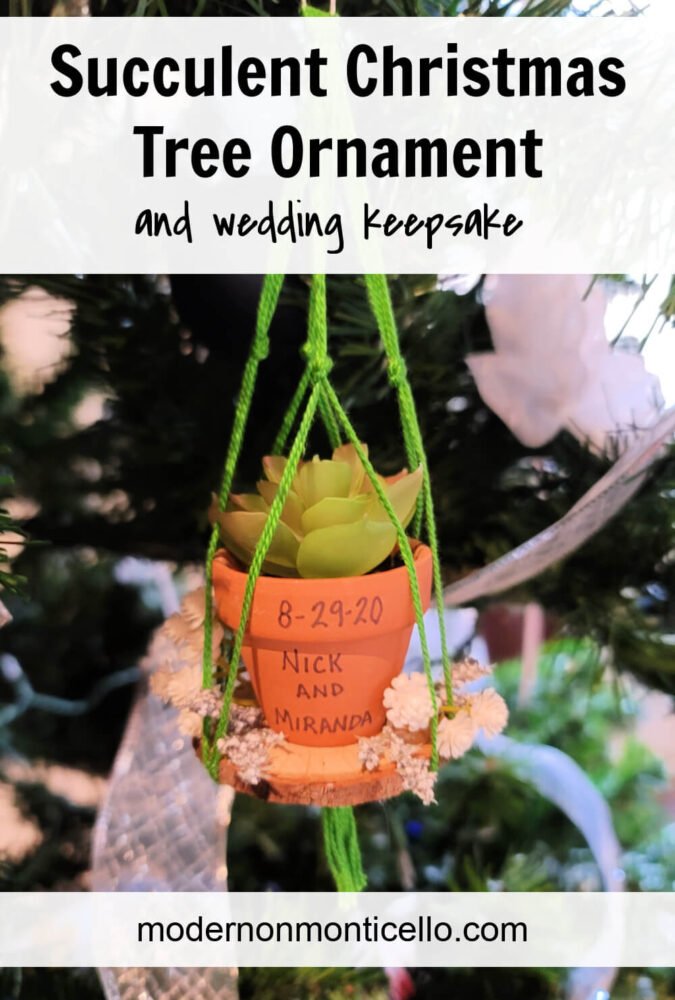 My daughter’s wedding was actually scheduled for March 29th, 2020 but because of the pandemic we moved it to August 29th.  She had planned to use succulents for the early spring wedding and thankfully we could still use all of the 75 or more faux succulents we had already purchased for the tables and cake decorations in August without starting over with a different seasonal look.

Now I have most of these little potted faux succulents in a closet in my house.  My daughter took a few of them home with her but for the most part I have to figure out what to do with them. 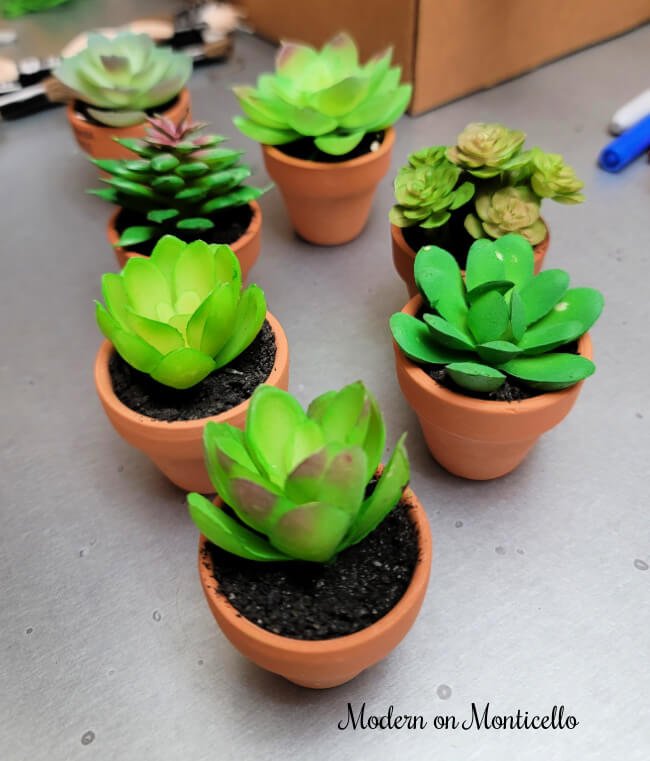 We purchased these tiny succulents at Michaels.

They are absolutely adorable of course but who really wants to display 50 or more tiny little succulent pots in their house. I also prefer to make something with them than donate them.

When I decided to participate in December’s DIY Blogger Challenge for Christmas ornaments, I immediately thought about these little potted succulents and how could I repurpose them in to Christmas ornaments for her as a keepsake from her wedding day.

Of course my search started on Pinterest for ideas but I mostly found pins using live succulents in glass orbs or ornaments.  I only found one pin for a small faux potted succulent with a macramé hanger and that post inspired me to come up with a version of my own.

So I made one out of twine – and found that the twine was too stiff to work with such a small project and it wouldn’t swing and hang like I wanted my ornament to look like.  I also had no idea how to finish it off to make it look more like a keepsake ornament. 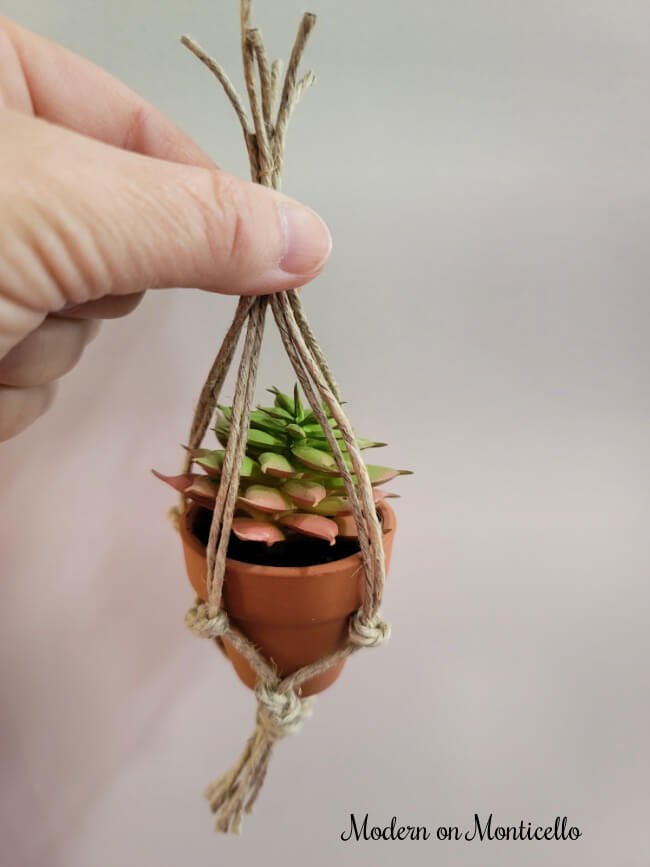 So I started over on a different way to make the ornament.

After a few more searches and watching videos on how to macramé – my Girl Scout days were a long time ago – I finally found a few other ideas on how to make mine look the way I wanted it to. 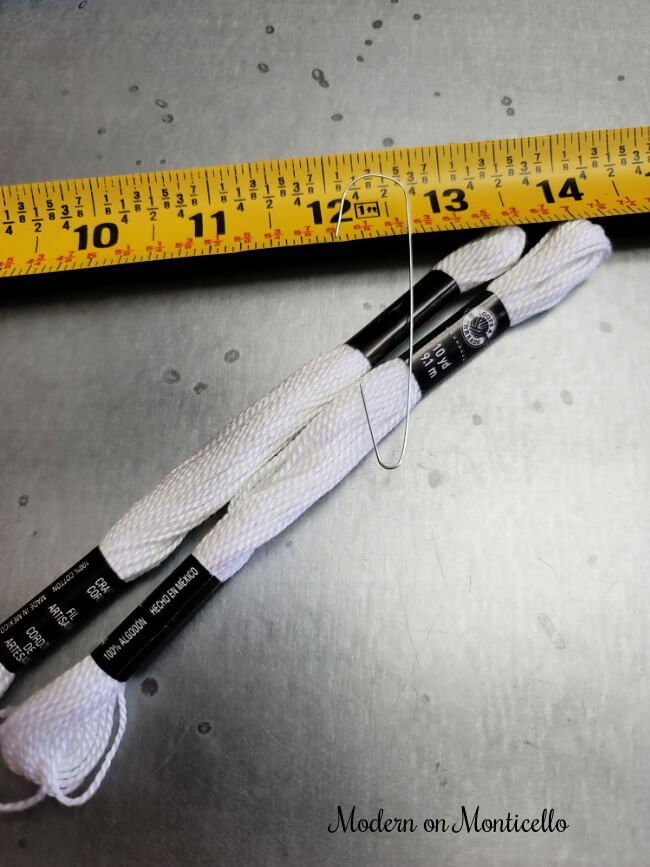 I used cotton craft cord instead of twine and cut the lengths of thread much longer than the first time.  I also used a metal ornament hook for the top instead of a ring.

For this project I cut 8 lengths of cord at 18 inches each.

Then I looped the thread around a Christmas ornament hook to double the amount of threads I was then working with.  So now there are 16 strands of cords to work with. 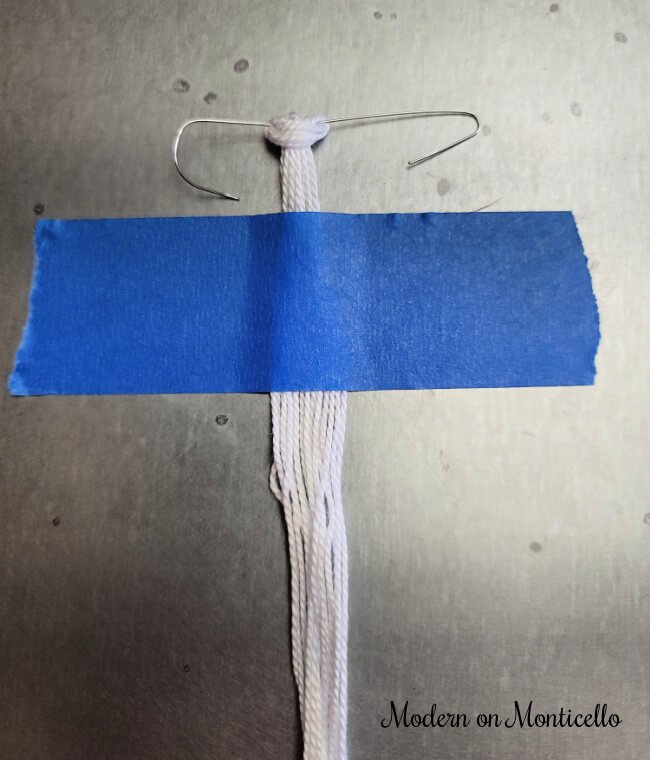 Dividing the threads in to four sections of four strands each, I tied a knot in each section about two inches down from the top loop.  Make sure that the knots are aligned together across the sections as much as possible. 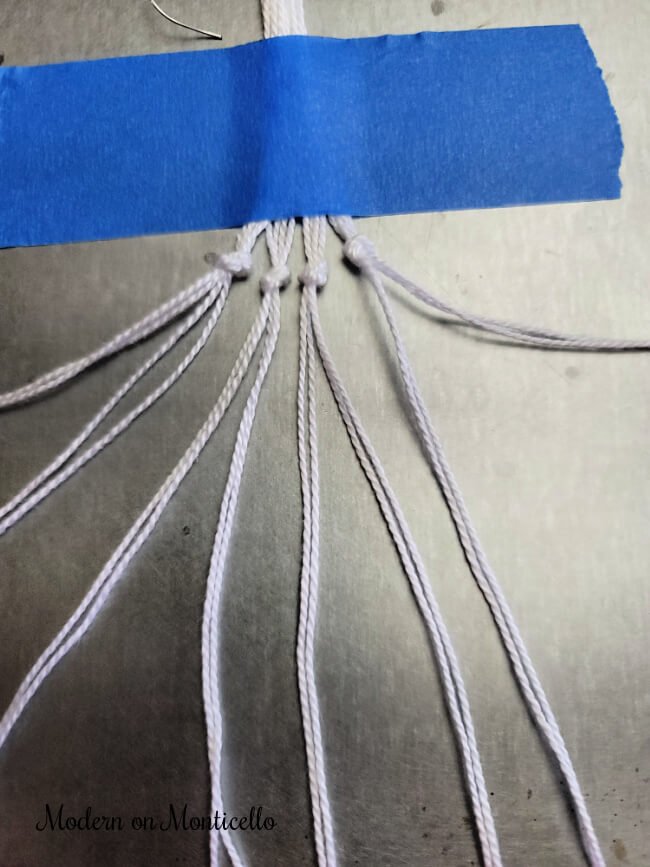 Then I measured down the length of the thread another inch or more and put painter’s tape in place to secure the threads from moving around.

It was at this point in writing this post that I realized that I had gotten so focused on making the ornament that I forgot to take pictures of all of the steps.  Good thing I am not finished with this project and actually made a third version of the ornament.

Either way, here are the steps I followed but you can see more photos of when I made the third ornament below.

Then you just easily place the faux succulent potted plant inside of the “basket” that you just formed. 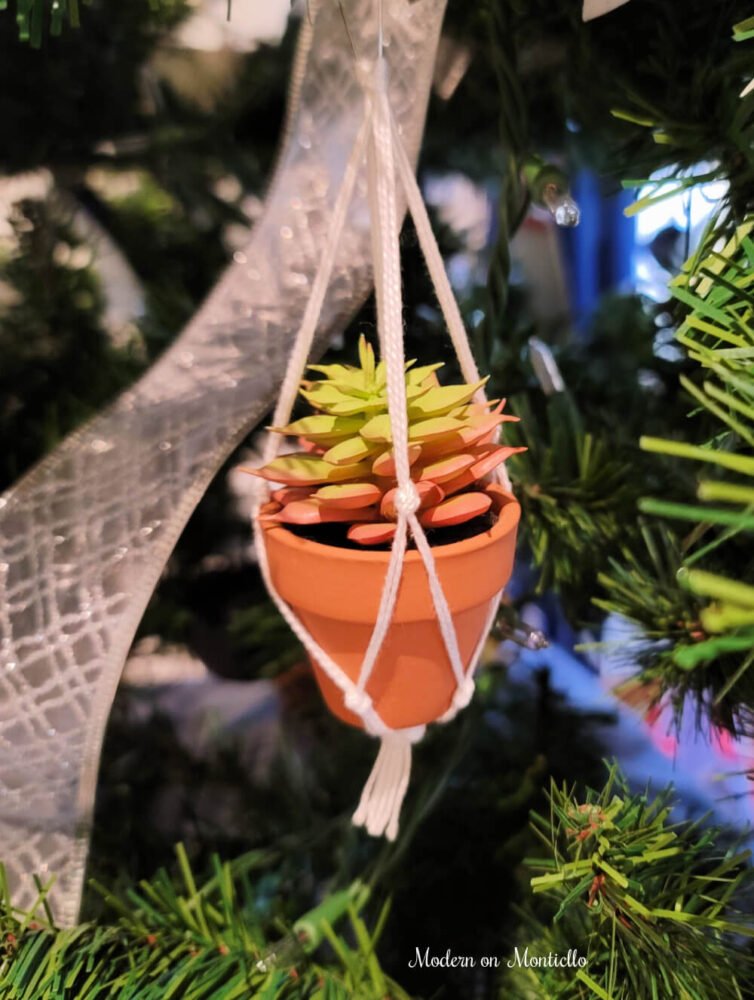 I like how cute this ornament is but it was rather plain and didn’t connect the ornament to their wedding day.

Now on to the extra challenge of personalizing this ornament and finally getting the photos taken of the third attempt.

Since the little faux potted succulent was part of my daughter’s wedding, I thought it would be a good idea to put their names and wedding date on the side of the pot.

I tried using a paint pen but the ink ran.  In the end, I found that a black fine tipped Sharpie to write their names and wedding date worked the best. 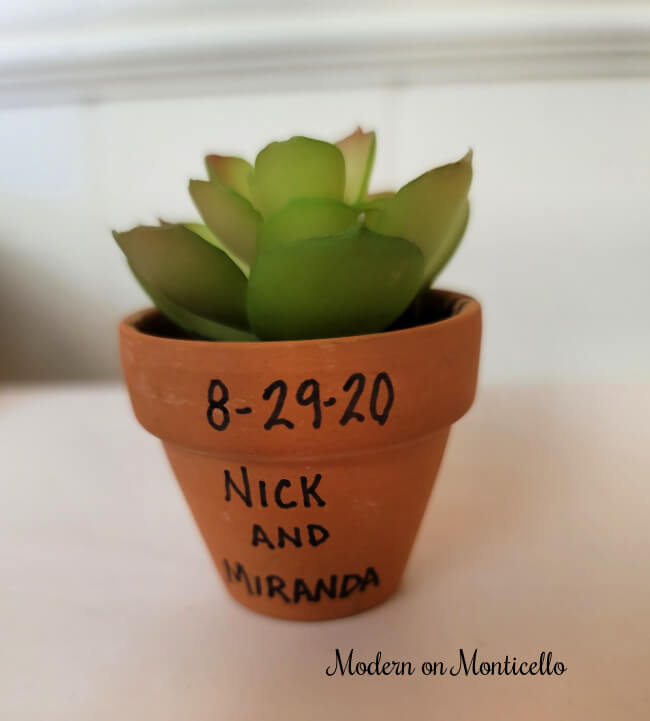 However, once I put it in the macramé holder, the strands of the hanger hid the wording. 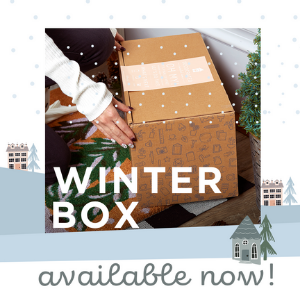 Once again I turned to Pinterest and searched for planted pot macramé hangers for inspiration and how to make a hanger that allowed the personalization to show through at the same time.

I found several pins that showed using a round piece of wood, or a wood slice, as a base or platform for the plant. 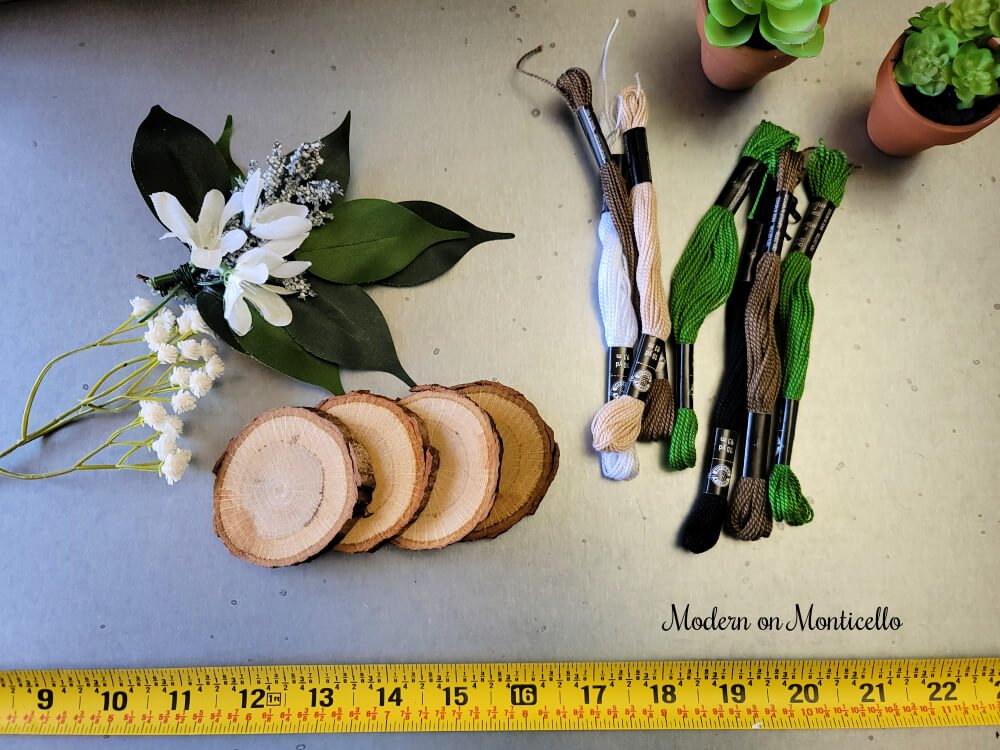 That was something I could easily replicate since I have several boxes of wood slices in my craft room just begging me to make something with them.

I repeated the same steps from the first and second ornaments but with some small changes. 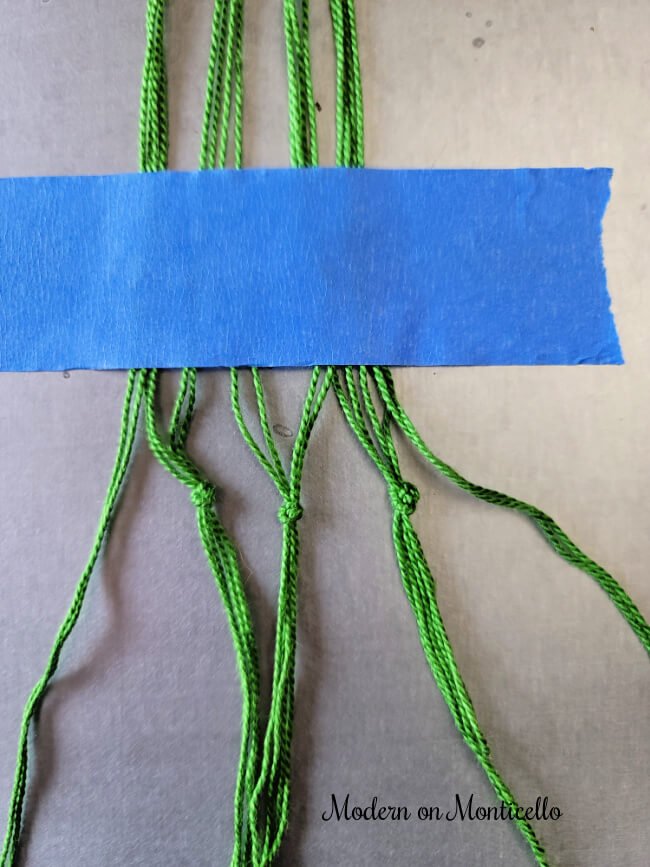 First I cut the 8 strands at lengths of 24 inches instead of 18 inches – and I used bright green craft cord.  (Mostly because our puppy stole my white cord off the table – but that is another issue all together.)

This time I also used a large paper clip for the hanger because it is stronger than the ornament hooks I had available.  This type of ornament has a bit more weight to it. 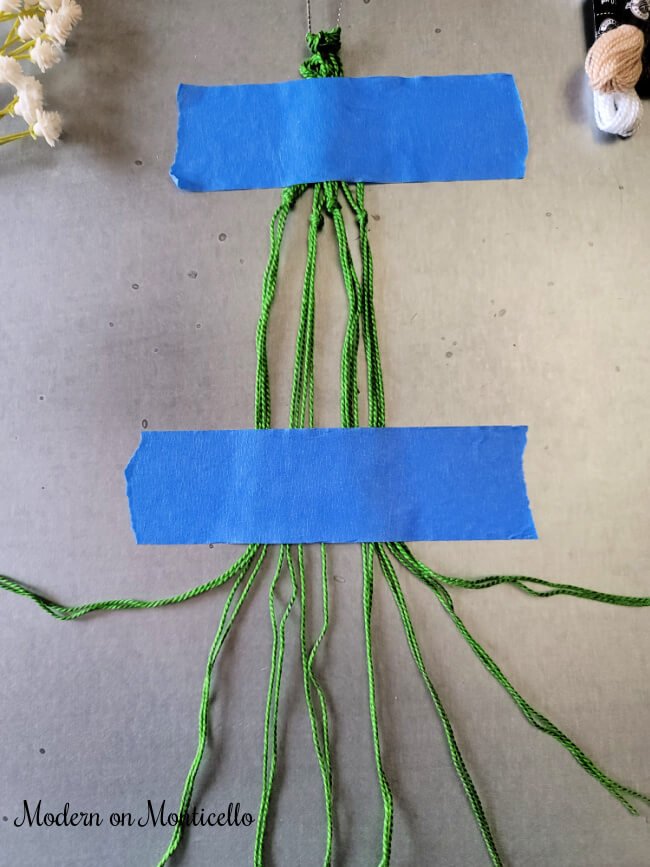 I also left more space between the sets of knots in the cording because this ornament would be slightly taller than the last one.

Once the macramé hanger was complete, I slid a small wood slice in the hanger and arranged the cording to hold it evenly. 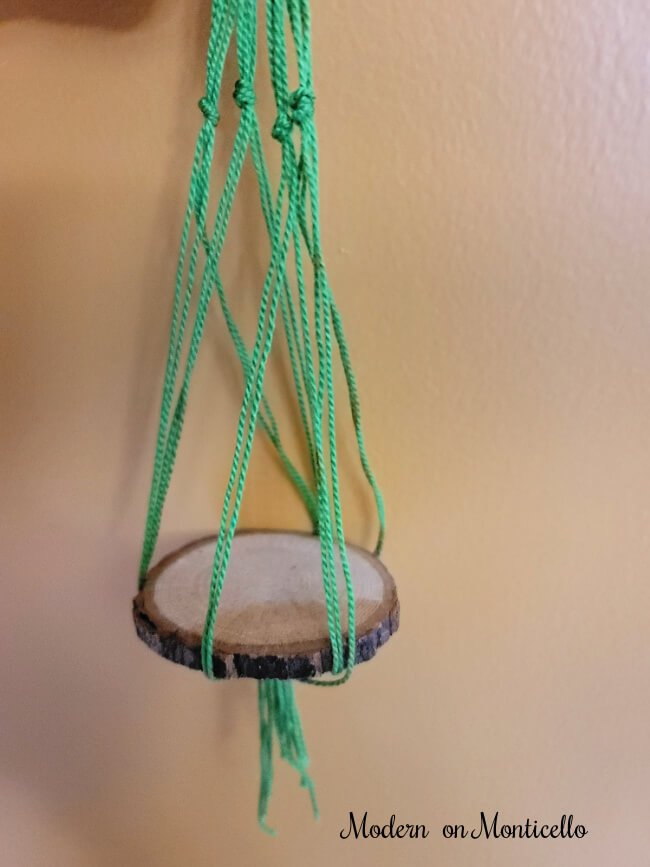 I also had some leftover flowers from her faux bouquet I made for her wedding portraits available so I snipped some of the smaller accent flowers and glued them around the pot. 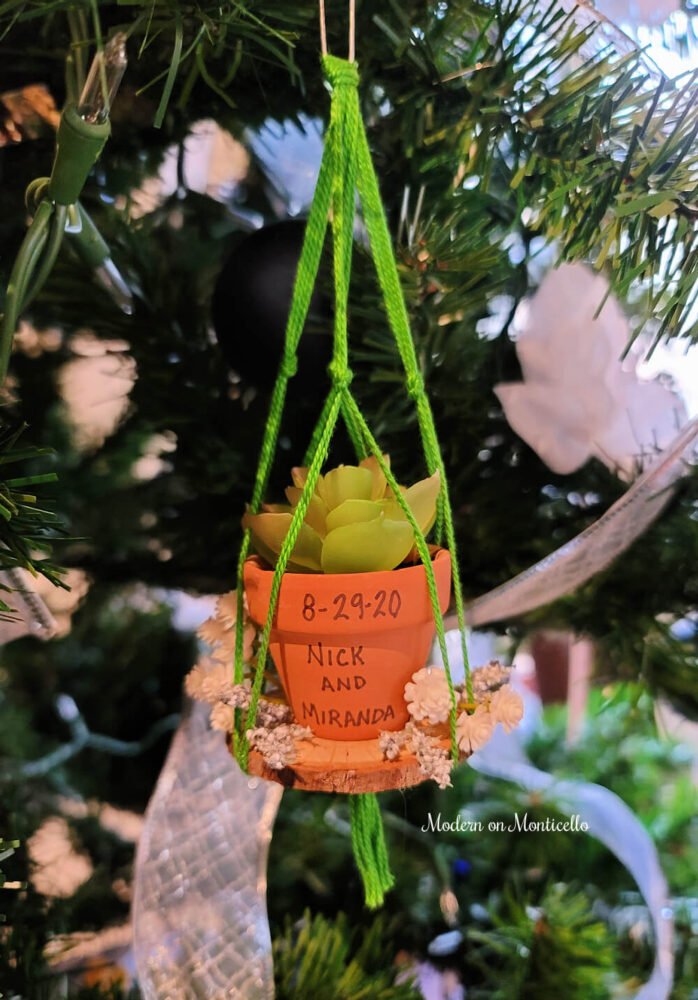 This ornament is not very Christmas-y in theme and color but it is very unique and personal for a wedding keepsake they can put on their tree every year. 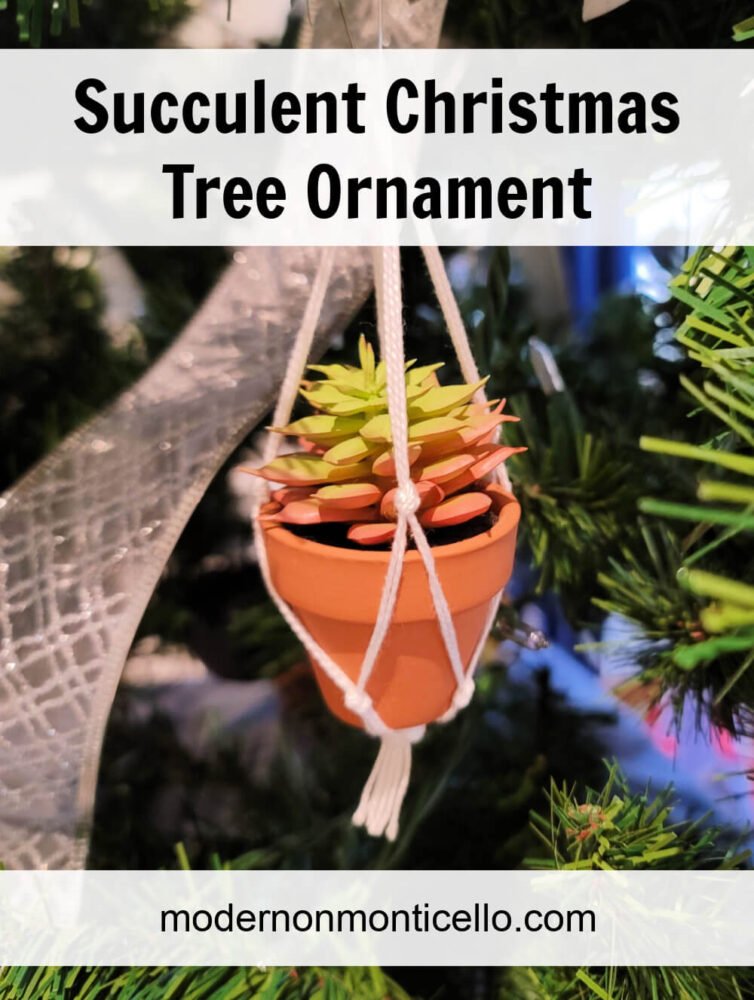 Be sure to visit all of the other creative and unique ornaments shared by some very talented bloggers in the Blogger DIY Challenge.

“Glory to God in the highest, and on earth peace among those with whom he is pleased!” Luke 2:14