Chaos, delays, frustrations, and lots of money lead to this final reveal.  For anyone who read my blog during the fall of last year, you read my frustration, sometimes excitement, and final relief when the end was in sight.  Now I can finally post the final pictures of the repaired and renovated master bedroom and bathroom after the extensive damage caused by a large tree.

But first, let’s revisit what the house looked after the tree fell.  On August 28th, 2015 at around midnight a large dead tree in the adjoining wooded lot next to our house fell on the master suite,causing extensive damage to the master bedroom, the master bathroom and the lower basement bathroom. 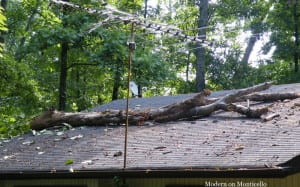 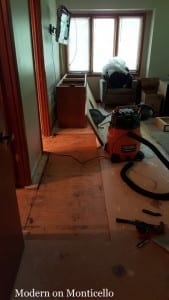 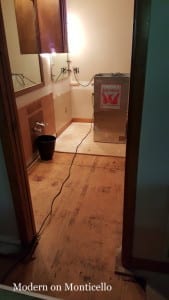 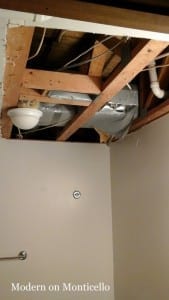 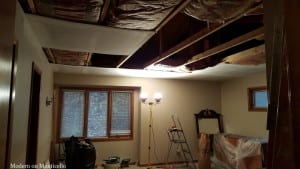 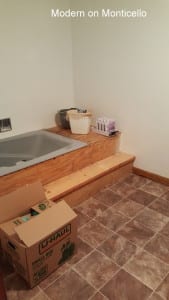 It was a wild ride for about six months.

I am so happy to be able to finally show the fabulous end results! 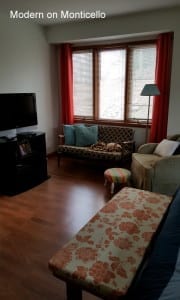 One of our dogs spends his days on the mid-century love seat as you can see him in a few of these pictures. 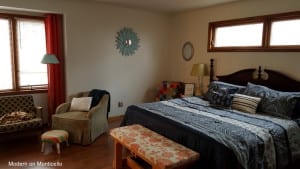 I had to move the mid-century love seat out of the screen porch room because the girl puppies were chewing the arms and eating part of the seat. It wasn’t planned for this space but I’m trying to protect it from further damage. It still looks pretty good beneath the window. 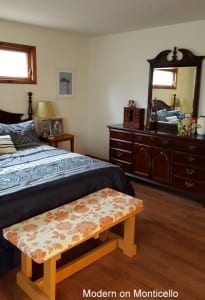 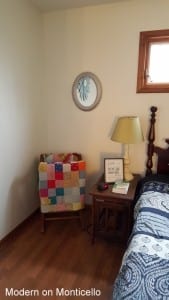 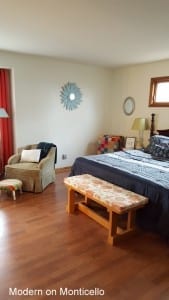 The dark and dated bathroom with tan carpet before the incident is now brighter and more colorful. 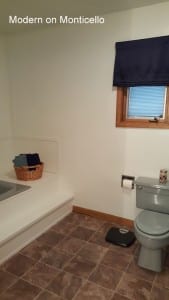 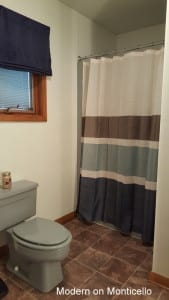 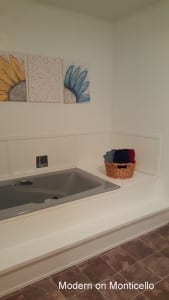 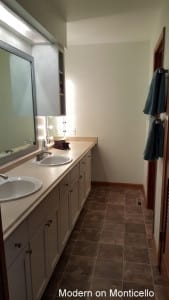 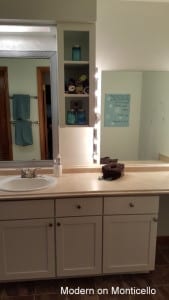 If the tree had fallen just two feet to the right, we would have lost the entire bathroom and not just the vanity area, so we still have the blue fixtures in main room.  I have worked very hard to blend the two rooms together and to make the blue-gray toned fixtures become part of a cohesive look by using the light blue and navy and orange tones from the master bedroom in both spaces.

There are still some things that I would like to add to the spaces.  We definitely need a rug in the master but I am enjoying the look of the laminate floors so much that I might just wait on that.  I would also like to add some orange colored add towels and pillows in the mix.  We still have some bare walls to fill but that will evolve over time.

I have wanted to remodel the master since we bought this house eight years ago, but the budget just wasn’t available while my husband was in school.  Nature took care of that problem though and gave me a remodel adventure we just hadn’t planned on going through.  I didn’t get the entire gut job, new fixtures, and larger shower I wanted, or the expensive tile and hardwood floors, but I can’t complain about the final outcome.

Proverbs 19:21, “Many are the plans in a person’s heart, but it is the LORD’s purpose that prevails.”